Why we should stand behind Kaepernick 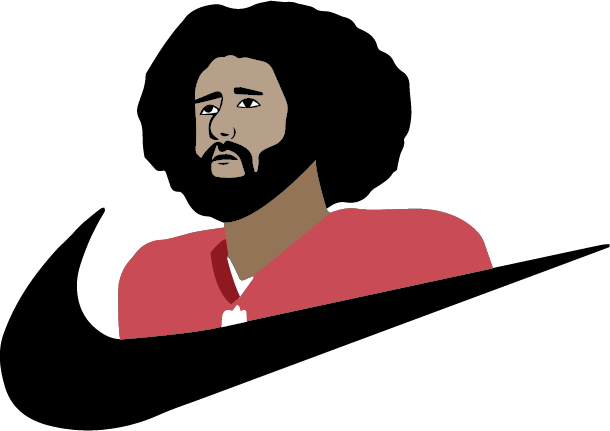 “I can’t breathe.” The last words of Eric Garner as he was choked by an NYPD Officer. It is situations such as these, ones that continue to happen, that spark the topic of police brutality and what we as Americans need to be doing about it.

On Sept. 5, Nike announced a partnership with Colin Kaepernick to celebrate thirty years of the brand. The former quarterback for the San Francisco 49ers received the media’s attention when he protested police brutality by kneeling during the National Anthem. An act that many, mainly white Americans, had a problem with. The Nike advertisement showcases different athletes and their stories of struggle. It ends with Kaepernick saying,

“Believe in something, even if it means sacrificing everything.”

Kaepernick saying he sacrificed everything did not rest well with many who watched the commercial. Many don’t believe that he has the right to say that he “sacrificed” everything when there are people dying at war defending the U.S. But the matter of the fact is that Kaepernick did indeed make sacrifices to bring light to an issue that was getting swept under the rug. Police officers were getting away with murder and no one was doing anything about it nor bringing the attention the issue deserved.

The protest started in 2016, when Kaepernick sat on the bench during the National Anthem. After he started to be noticed for doing so he reached out to a former veteran.  Nate Boyer the long snapper from the Seattle Seahawks, also a former veteran, told Kaepernick that the most respectful way to protest was to kneel rather than sit. Many defend the protest saying that he is exercising his constitutional right as an American. Kaepernick himself said that his aim was not to protest against the military but rather not to stand for an anthem that systematically oppresses black people and those of color.

The fight for equality is often looked over by those who have never had to fight to be seen as equal. Most of the people who are complaining about Kaepernick’s protest have never had to deal with discrimination themselves, they’ve never had to fear the police or authority figures. The fact that someone would rather try and argue that kneeling is disrespecting the flag rather than fight for their neighbors, classmates and fellow Americans says so much. It says that only specific people are allowed their constitutional rights. If someone expresses how they feel or if they speak for an issue that is selective, they are shut down. Who are white people to try and make an issue that stands for black people about the American flag? We have the right to choose whether or not to salute a flag that does not always stand for minorities.

Kaepernick would not return in 2017 to the NFL as many teams did not want a player who caused a great deal of controversy for the brand. As of now, Kaepernick is unsigned and has devoted time to continue fighting against injustices the Black Community faces and restoring American Justice. He has donated money toward training police officers in situations in which they feel uncomfortable– something that previously has ended in lives lost. The least that we can do, as fellow Americans, is support those who exercise their constitutional rights, whether we agree with them or not.