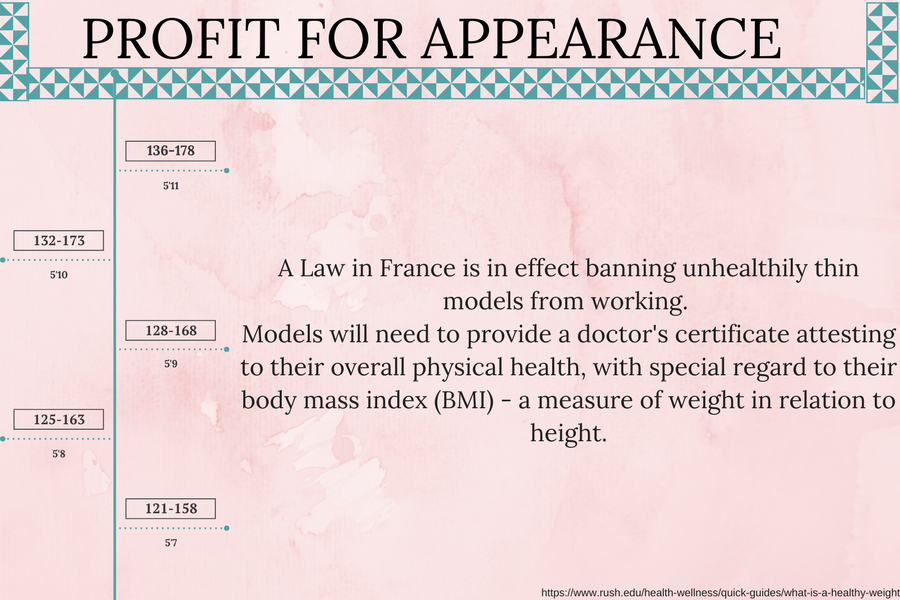 Recently, France was the latest country to not allow models to pursue their career if they did not appear to be healthy enough. France did not find it right to be putting models out there that did not seem to look healthy. There were many things that made France want to make this final decision, just like Spain, Italy and Israel have already done. The country wants to be represented well, and it was obvious that putting a model in the public eye that did not look healthy was not a good for the public to see.

The main idea that France was trying to get across was that models looking unhealthy is sending the wrong message. All the people would see was how unwell the models were looking and the products getting modeled would no longer be the main focus of the advertisements. Many of the them see other models that are skinnier than them, which changes the models eating habits. Seeing people that are suffering from anorexia causes many people to have the desire to be skinnier. Many models are starving themselves, which causes them to the nutrition that the body needs to function. Although being thin is not considered a disease, it had become such a distraction that it would be all that audiences noticed.

One of the ways this will affect models in France is if their Body Mass Index (BMI) is lower than what doctors think is healthy for the human body. If companies or modeling agencies are found using models that have a BMI under the healthy amount, than they risk serving up to six months in jail and paying a large fine. A company that wishes to use these models who are not healthy are creating a bad image for the company within their country and are risking hurting the future of the company also. Evidently, having models that look like this have more than just one hurtful effect.

If the United States took part in this decision, it would impact the country in a positive way. Agencies and companies may not realize that their products are getting looked over for the reason that these models are causing a distraction in ads across the country and the world. Allowing models to model when looking this way does not represent the company well and shows that they do not care about the health of their models. If well known people have anorexia or other diseases from not eating, students and younger children are going to be influenced by these actions. More people and countries should take this idea into account to make sure that companies and the models themselves are represented well.