Why I prefer to eat vegetables instead of animals

If you are unable to finish this article without feeling guilty, you should stop eating meat. 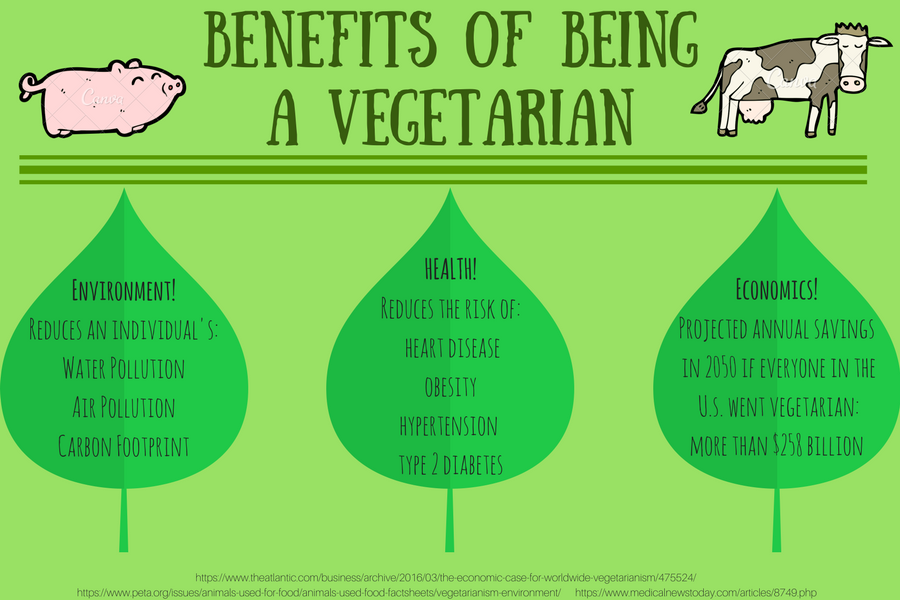 Think about a lean, juicy, flavorful steak. Is your mouth-watering? Now think about where it comes from. Do you feel like you understand the meat industry and how a tasty steak gets onto your plate?

Yes, I am a vegetarian. I have been made fun of, criticized and ridiculed because of the decision I have made for my personal health, as well as for the ethical treatment of animals. This, however, does not stop me from fighting for what I believe is right. My choice to be vegetarian is not only a benefit for my personal health, but also for animals and the environment.

Many Americans choose not to expose themselves to the process of making meat. Often times, the reality of meat production is hidden from us. Instagram shields its users from “sensitive content,” such as videos that show how animals are treated in slaughterhouses. Similar YouTube videos are age-restricted. The reality is that animals are killed in extremely inhumane ways. I believe that everyone should have the choice to eat or not to eat meat, as long as they understand how it gets onto their plate. Once again, do you thoroughly understand how steak is made?

Cows are first bred, born and separated from their mothers, screaming in sadness and fear. As babies, cows must be dehorned. Their horns are sliced or burned off and they are branded with burning irons. The animals endure these painful processes without painkillers. They are then fattened up, auctioned off and finally taken to slaughterhouses. Their journey to the place they will be killed is long and agonizing. The cows are packed into trucks and driven long distances, often for two to five days, without food or water. Many die along the way from exposure to extreme temperatures, hunger or thirst. Those who survive are shot in the head with a bolt gun, hung from one leg, skinned and finally gutted. The meat from these animals is highly processed, packaged and brought to grocery stores, restaurants and fast food joints.

Additionally, there are many misconceptions about the health aspects of vegetarianism. For example, I am often asked where I get protein. I understand that protein is a vital part of a diet, so I make it a priority to get enough protein each day. My protein comes from nutritious foods including beans, nuts, quinoa and much more. I also eat vegetarian substitutes for bacon and sausage on a regular basis.

A vegetarian diet is very beneficial to the body. Vegetarians more frequently consume increased amounts of fiber, unsaturated fats and vitamins C and E. These benefits lead to a lower risk of heart disease and a lower blood pressure. On the contrary, meat is extremely unhealthy. It significantly increases the risk of cancerous diseases. Processed meats such as salami, bacon, and hot dog meat can lead to colon or rectum cancer, according to Cancer Research UK. Not only does meat increase the likelihood of cancer, but it also increases one’s risk of heart disease and diabetes, carries foodborne illnesses and makes it more difficult to maintain a healthy body weight.

Something that is not talked about nearly enough is the impact that meat production has on our environment. With greenhouse gases being emitted from slaughterhouses and factories, animal agriculture contributes to 51% of global warming, according to PETA. Additionally, extreme amounts of water are used in the production of meat. In order to produce a single pound of beef, 2,400 gallons of water are used. Ocean habitats are being destroyed by commercial fishing methods. Not only do fish farms release parasites, antibiotics and non-native fish into easily affected ocean habitats, but many animals such as dolphins, sharks and sea-turtles are killed when fish are harvested. Meat production also uses land, clearing 90% of the amazon rainforest since 1970, whilst contributing to pollution.

People consistently tell me, “You realize that not eating meat isn’t going to change anything, right?” I disagree. In fact, I have saved over 100 animals, being vegetarian for about a year. I have contributed to the reduction of global warming. I have made myself healthier and increased my chances of living a long and healthy life. I am not telling you to stop eating meat today and never eat it again. I am telling you that you should think about your decision to make animals and the Earth suffer. If saving animals, helping the earth and being healthier sounds appealing to you, try being vegetarian for just a day, week or month. It isn’t difficult. It is easy to give it a try. If you need help getting started you can order a free vegetarian starter kit from PETA here or visit The Gentle Barn near Los Angeles to learn more about meat and dairy production and visit animals that have been rescued from slaughterhouses. Challenge yourself to do the right thing. Think about animals, our earth and yourself. Make the right decision for you.