The Paris Climate Agreement gets trumped 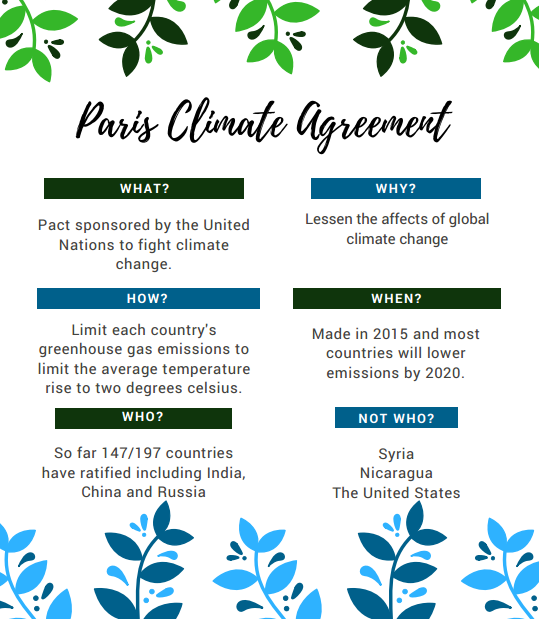 On June 1, Donald Trump made the decision not to sign the Paris Climate Agreement. While many of Trump’s decisions spark controversy throughout the globe, this particular one could affect generations to come.

So what is the Paris Climate Agreement and why is it so important? The Paris Climate Agreement began in 2015 where 196 nations made a pact to lower greenhouse gas emissions, adopt green energy sources and learn how to cope with the unavoidable affects of climate change. The agreement set quotas for each country to reduce its emissions by a certain percentage by the year 2020. Being the second highest greenhouse gas emitter in the world, the United States would have to reduce its emissions by 26-28% lower than its level in 2005. While the Kyoto Protocol initially acknowledged global warming back in 1997, the Paris Climate Agreement tackles how to deal with it and curb the problem and lessen its effects.

With a government that has a history of denying climate change, it might not come as a surprise that Trump pulled the U.S. out of the agreement. But why? Because the United States is responsible for a large portion of global climate change, a lot of the blame falls on the country, increasing the amount of money needed to reduce emissions that are required by the agreement. Although the United States will not fully  unravel all of its environmental policy, backing out of the Paris Climate Agreement symbolizes America’s lack of commitment in the fight against climate change.

Although the United States will join Nicaragua and Syria as the only countries to not sign the Paris Agreement, the country won’t completely stop all of its green initiatives. In fact, Trump just said he would rather negotiate a better deal, not entirely denying climate change and its effects. However, there is little room to renegotiate as the agreement sets quotas for each country based on their use of greenhouse gases, so in order to lower the amount or change required, the U.S. would have to enforce lowering green house gas emissions.

Global warming has become an irreversible manmade issue since the Industrial Revolution, and its affects could greatly harm the earth for many years. For small island nations especially, global warming could potentially put major coastal cities and nations underwater in the next hundred years. Climate change also has the potential to contribute to the sixth mass extinction of many species around the globe.

America has been world leaders in many other issues like labor laws and safety, so why can’t we serve as leaders in environmental issues? After all, there is no planet B.

The Paris Climate Agreement represents so much more than a fight against climate change. It brings the world together to tackle an issue that affects some nations more than others. It’s time for the United States to accept its role in climate change and band with other countries to fight the issue and become a role model rather than a problem.