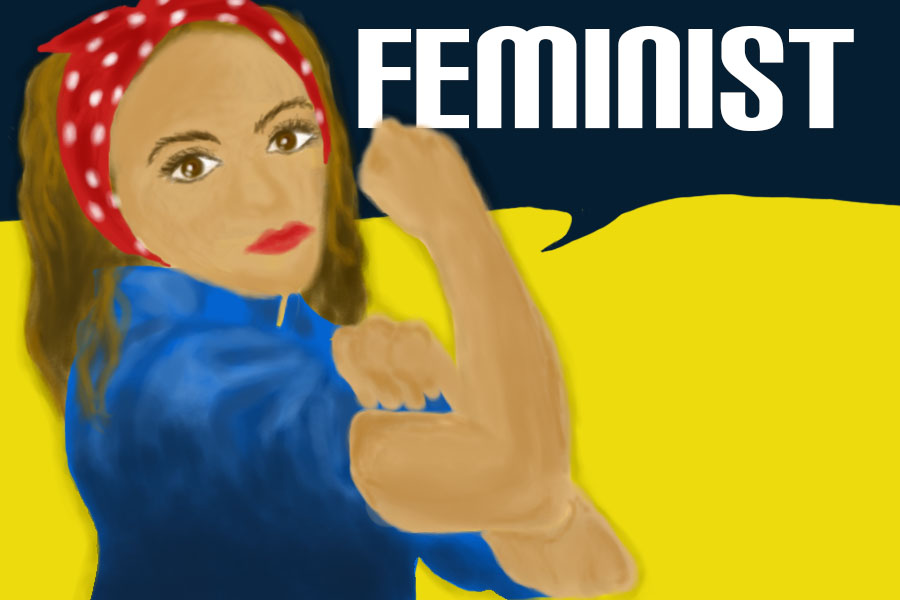 What do Beyoncé, Kurt Cobain and Susan B. Anthony all have in common? Well besides their records, chart toppers and dollar coins, all of them are feminists. All of them have publicly declared their support for gender equality.

Feminism is the advocacy of equating social, economic and political rights –it’s the cultural belief that men and women should be treated as equals. Both women and men can be feminists –yes, men too! Absolutely anyone and everyone can (and should) question tradition. Feminism reminds us how successful rebellion can be. No one should have to settle for the opportunities that exist; we should all strive to obtain the opportunities that we deserve. And while striving for gender equality seems like common sense, there are several reasons why people do not like the term, feminism. First, some people believe in the misconception that feminists are anti-men. This simply isn’t true; feminists are anti-sexism. Also, there are many equality advocates who don’t consider themselves feminists because they feel no one should have to label themselves in order to achieve civil rights. And while the times are changing, history does not.

Flipping through any social studies textbook, it’s not very difficult to discover that men wore the pants and ruled the roost. It would also quickly become apparent that there was a lack of gratefulness towards the opposite sex all over the world. Men seemed to forget that the creation of civilization would not be possible without women.

When ancient polytheistic cultures worshiped both male and female gods, there was a greater likelihood that women were valued in society. Egypt even had its fair share of female pharaohs! But as cultures began to idolize a single male God, women became associated with the lesser.

And the struggle still continues.

Because we live in Carlsbad, in a liberal state and in a first world country, we tend to take our civil freedoms for granted. In Saudi Arabia, women can’t drive. And in Yemen, women can’t leave the house without their husbands’ permission. But in the Vatican City, get this, women still can’t vote. However all these countries are on the other side of the world.

So why should we care?

Well, we should care because feminists have (and will continue to) heavily impact our lives. The movement acts as a reminder, telling us that we should never settle and never be afraid to disagree with the status quo. Feminism continues to evolve, and this societal rebellion continues to change our wardrobe, career market, entertainment industry and paychecks.

In the 1920s, women wanted to make a statement, showcasing their masculine strength. Many stopped trying to achieve curvaceous figures, by wearing loose clothing. And a short haircut became popular, aptly named the Bob. Twenty years later, when men were drafted in World War II, Rosie the Riveter propagated and encouraged women to take the factory jobs that were now available. Rebellion against sexist oppression was prevalent even before the creation of feminism. In 1963, Betty Friedan’s novel The Feminist Mystique was considered the start of the feminist movement. Fifty-one years later, feminism still exists! Only instead of Sylvia Plath, Margret Thatcher and John Lennon leading the movement, new celebrities have carried out the rebellion. Modern feminists include Ryan Gosling, Angelina Jolie and Joan Rivers.

On Sept. 4, the world lost a revolutionary female comedian, who made it possible for other women to enter the entertainment industry. Joan Rivers spent over half a century defying stand-up comedy expectations. Feminists like Rivers, fight the norm and find time to laugh while doing so.

We have made strides. Women are teachers, entrepreneurs, Chief Executive Officers and presidential candidates. Even on Carlsbad’s campus, we have made strides. We have a female ASB president, Sarah Lang. We have a female Athletic Director, Mrs. Amanda Waters. And as Dr. Matt Steitz leaves Carlsbad at the end of this year, Ms. Megan Coelho will take over as principal. Change is inevitable, but it doesn’t come easy. A large percentage of American women still face financial discrimination in the work place. And this past April, the Senate failed to make a difference by not passing the Paycheck Fairness Act.

Life will always present some kind of battle. The feminist movement is just one example of cultural rebellion. And no matter what your view may be, I urge you to never settle. Never settle for what opportunities are in existence. Instead, you should create the opportunities that you deserve.