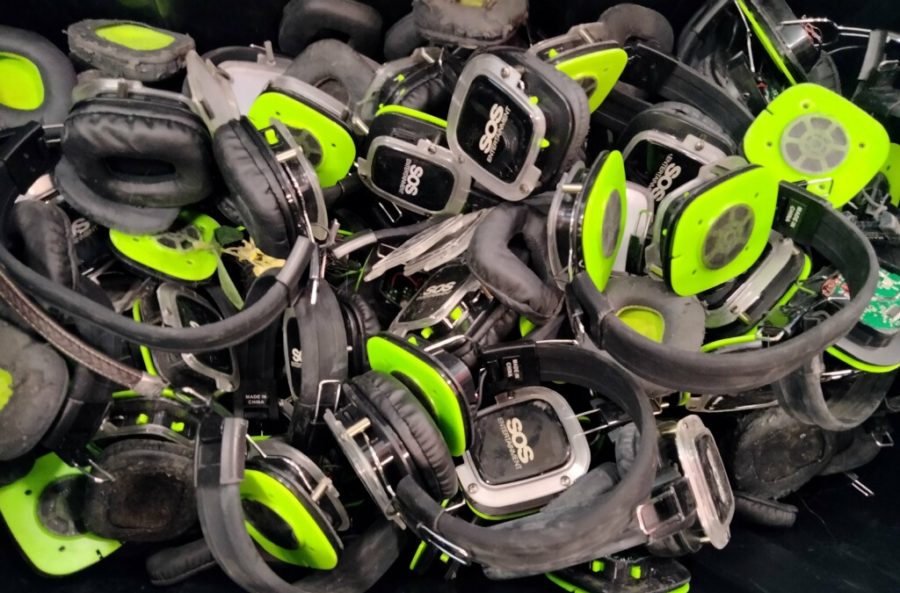 Dance attendees broke at least 60 sets of silent disco headphones at the dance. The company found many on the roof of the Old Gym. Once the final count of damaged units is determined, CHS will be responsible for paying to replace them at $80 a pair.

This past weekend was Carlsbad High School’s 63rd annual Lancer day. For the first time that administration can remember in CHS history, the dance ended prematurely due to poor behavior by dance attendees. Administration had no choice but to issue consequences for the rest of the year.

“There’s just a lot of items that we contract out with our entertainment company SOS that we are now having to pay back [because of damages],” assistant principal Julie Redfield said. “And the final straw happened when we had to cancel. We had multiple warnings that the behavior needed to stop and it didn’t end there. The mosh pit was getting pretty out of control.”

The Homecoming dance was not the first place where inappropriate behavior has been seen this year. At the Friday night football games, students crowd surf in the bleachers and launch water bottles at other students.

As a result of the poor behavior, students are now facing consequences. The severity of these repercussions will depend on whether or not the behavior improves, both during school hours and at other school events.

“Well, the immediate [consequence] that’s going to affect the students will be our next home football game against La Costa Canyon in a couple of weeks,” Redfield said. “That’s our pink game when we do the powder. So we’re not able to do the powder. We get the most spirited school in the nation and those activities are part of it, but we aren’t going to be able to do that. We don’t want to cancel dances; that’s what makes going to high school so much fun and that experience.”

The set punishments so far are that the underclassmen will not be allowed to attend Winter Formal, there will be no powder at the next home football game, and Snow Day and MORP are currently on hold as administration monitors behavior moving forward.

“With so much of our high school experience robbed by COVID-19, all the seniors were looking forward to celebrating our final football season and final home game together fighting for a cause,” senior Mia Werwage said. “The powder game not only brings together our community [but] it brings awareness to the devastating effects of breast cancer. It’s frustrating to see our senior year fall apart due to the immaturity of underclassmen.”

“I believe that the behavior at the dance got a little out of control and that it could’ve been avoided, but it got a little bit too far out of control,” sophomore Lily Pracuta said. “You can have fun without being destructive. And although it stinks, I do think the punishment is fair for the actions, and I do think that the juniors and seniors should get their dances, but I wish that we all didn’t have to be punished for others’ actions.”

Administration has identified many students engaging in poor behavior. They are also encouraging students to come forward and inform them if they are aware of any other students that participated in the destructive behaviors on Saturday, or those who demonstrated disrespect towards the campus and faculty during the school day.

“We need to be leaders on campus. It doesn’t matter what grade you’re in, you need to just be a leader and a role model,” Redfield said. “And if you see students that are doing things that we know are not okay, against school rules, or it’s affecting someone’s safety and their education, then I think that the best thing is just to be visible and say something.”