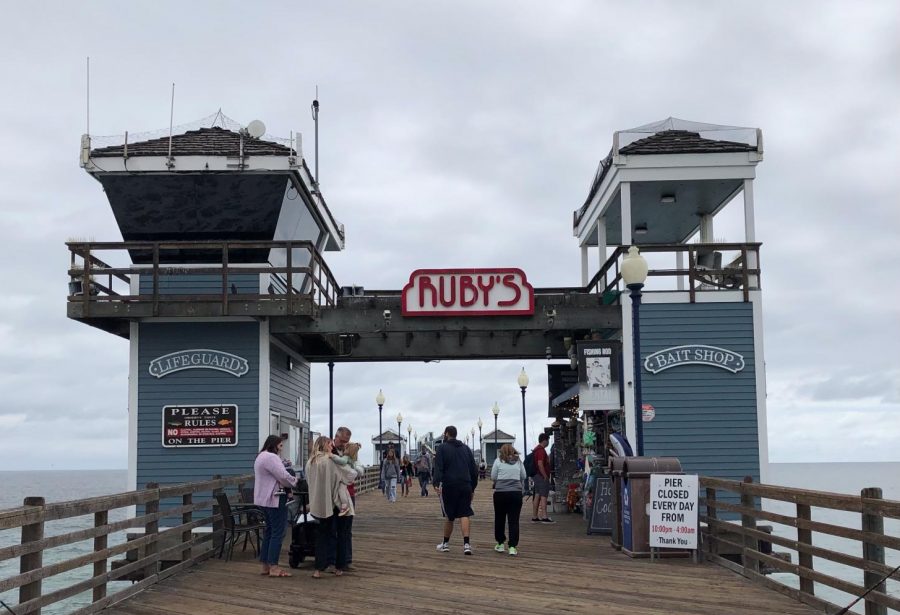 The Ruby's diner sign still hangs on the Oceanside Pier after the restaurant shut down in early Mar. 2021.

Established in 1982, the Ruby’s Diner that sits on the end of the Oceanside Pier has become a loved spot by both locals and tourists alike. It was a perfect spot to grab a bite on a beautiful sunny day, as it overlooks the ocean and the notorious Oceanside Strand Beach. However, after 39 lengthy years, the diner has served their last burger. Even though the Ruby’s Diner in Oceanside has closed, other locations will remain open.

The diner had to terminate their time on the pier due to unforeseen circumstances, but it is speculated that the closure was due to the loss of income to support the business due to the circumstances of the pandemic. The Oceanside Pier had been closed for months, but once the pier was allowed to reopen, too much business had been lost to comfortably get the diner running again.

Many locals have fond memories of the Ruby’s Diner on the pier. For lots of CHS students, the diner was one of the many staple hangout spots to go grab a bite with friends. Senior Marshall Degnan shares his favorite memory of the diner.

“A favorite memory is probably when one of my friends had a beach house around the pier and then we went to go get milkshakes at night after a long day at the beach,” Degnan said.

The closure of the diner has definitely impacted our community. While the impact may not be obvious, the loss of such a prominent building in northern San Diego affects the people who viewed the diner as an important part of their story of life. For at least one couple, the diner could have been where they had their first date. For a group of teenagers, the diner could have been where they went for dinner before their last homecoming dance. Senior Graciela Fabiano gives her take on how the closure of the diner affected our community.

“I feel that the closure of the diner affects our community because it was a place that brought people together to enjoy the beautiful Oceanside beach,” Fabiano said.

The Ruby’s Diner on the pier was definitely a one-of-a-kind restaurant in our community. However, there are many other places in our community that can closely reciprocate the experience the diner gave to its customers. Senior Sofia Araujo shares one unique spot that they came across in our beloved city of Carlsbad.

“The Carlsbad Windmill is one of my favorite unique restaurants in Carlsbad because it’s a restaurant inside of a windmill. It’s definitely not a typical spot for a restaurant,” Araujo said.

It is currently unknown what type of business is going to run inside of the building where the Ruby’s Diner once operated, but it is confirmed that a new tenant will soon sign (or has already signed) a lease for the structure.

“I’m a tad heartbroken to hear about the closure of the Ruby’s Diner on the pier, but I’m super excited to see what the City of Oceanside is going to do with that spot next,” Araujo said.