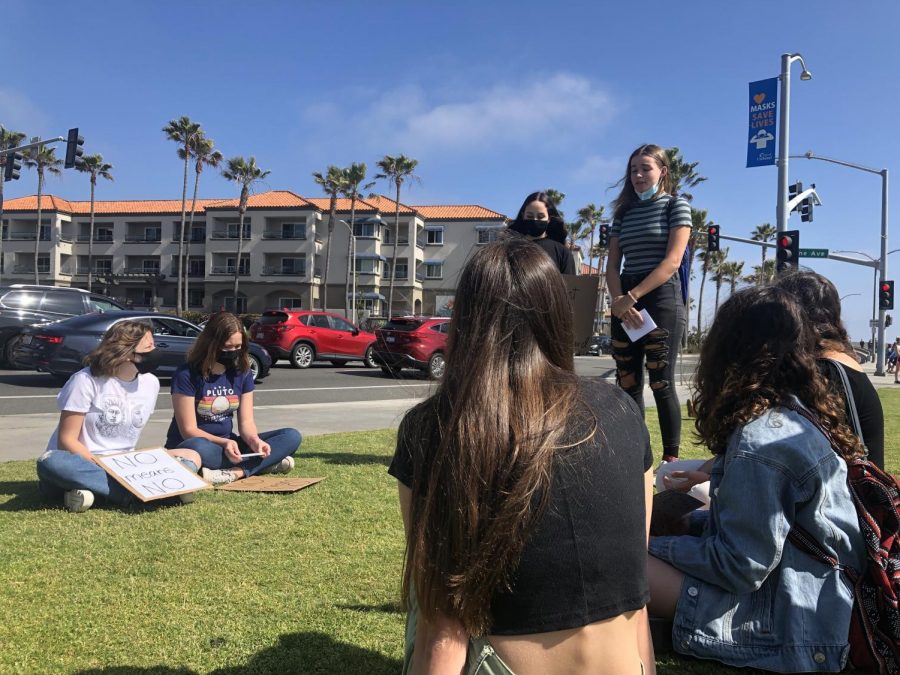 Organizers Carlin and Thim sit down with other women of Carlsbad to discuss how they felt about their safety.

Over the last year, social justice has become more and more mainstream. Now that the world is finally having these important conversations, protests and marches have popped up all over Carlsbad. On Saturday, April 4, sophomore organizers Sophia Carlin and Maddie Thim led a group of girls through the streets of Carlsbad village, many brandishing signs with the phrases No means No or She was just walking home.

They marched in silence for the lives lost to domestic violence and sexual assault. After their march of silence, the group sat down to have a discussion about how to cause change.

“Nearly one-third of women experience physical or sexual violence worldwide,” Carlin said during her opening speech. “People are forcing women to change for men instead of just telling men to grow up.”

The discussion was open to any and all participants to share their stories or whatever was on their minds. Thim and Carlin started off the conversation by asking participants to share what they did to protect themselves when going outside. Responses ranged from walking with a friend to carrying pepper spray and Swiss army knives.

“It’s honestly really scary and sad when you hear about [sexual assault],” Thim said. “The reality is that it happens. It shouldn’t but it happens.”

Girls then shared their personal experiences with sexual assault or harassment, which will be kept private, but it should be noted that every girl had a story whether it was shared or not. After in-depth discussions on the issues facing women, especially younger women in society, Thim and Carlin thanked participants for coming.

“Sexual harassment is not new,” Carlin said. “And I refuse to let it become just a part of society.”