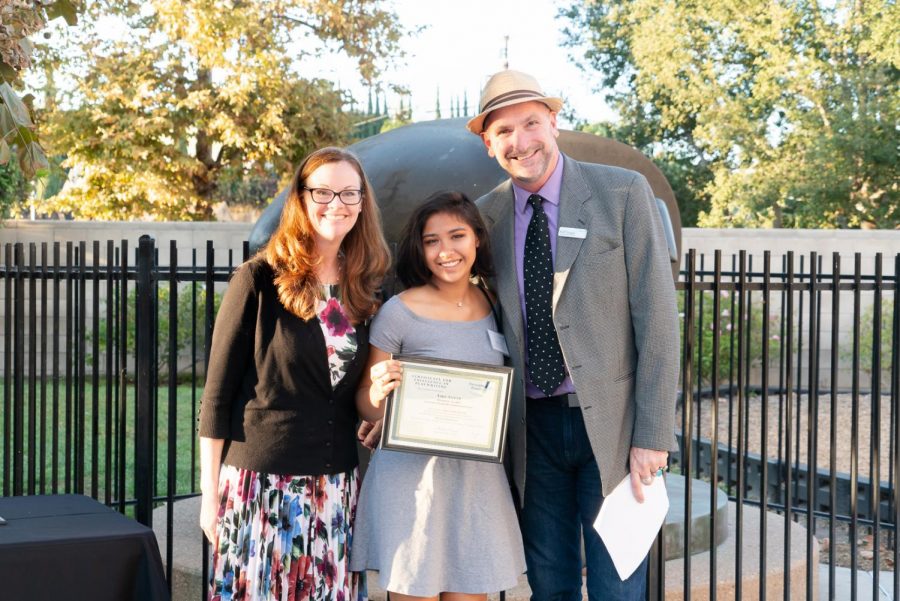 (From left to right) Playwrights Project Executive Director Cecelia Kouma, Aiko Lozar, and Festival Artistic Director Ruff Yeager. At the Lights-Up event in Balboa Park on October 23rd. Yeager will also serve as the director and dramaturg for Love is Blind: A Spoken Word Play.

Timeline of “Love is Blind” Play

Students and parents may remember last year’s Student Productions Club first-ever production, a play titled “Love is Blind.” “Love is Blind” was Carlsbad High’s first student-written, produced and directed play, taken entirely from junior Aiko Lozar’s inspiration. The play dealt with a future dystopian society that loses its ability and desire to love freely, and instead, love is of a predestined nature in a black and white world where colors appear once you meet your match.

Tickets for all four of its showings were sold out. The play has now been chosen out of a selection of 561 other student-made-plays to be reproduced professionally at the Joan B. Kroc Theatre by the San Diego based Playwrights Project group.

“It’s the coolest thing to see something that is my work to go through so many renditions, from my own idea to acting it out with Student Productions Club, to now professional adults in a theater it is just amazing,” Lozar said.

The Playwrights Project association, by which the play will be eventually reintroduced, hosted its 35th annual “Plays By Young Writers” competition on Oct. 23rd where students entered their own scripts for the possibility to be reproduced on the professional level. The competition winded down from a selection of 561 to three scripts with full professional support and re-production.

“The only requirements are that you need to be between 14 and 18 years old, and be in California, there wasn’t really any page limit for the script itself,” Lozar said.

“This whole production, all this work was done entirely by students and I really appreciated all the details and work that went into just making such a beautiful play,” said Ms. Wentland, the Art and Science of Wellbeing teacher who saw the play last year.

The reproduction will add few new elements to the play, instead opting to keep most of its aspects the same while building on the play’s existing themes and adding a more professional feeling to the play, given it will be featured in a theater and performed by professionals. Lozar and the Playwrights Project members involved in the reproduction will be discussing changes to the play until rehearsals begin this November.

“We have talked about instead of having it be set in this dystopian future and be in real classrooms, the plot is going to be set in an underground poetry club in New York in the future,” Lozar said. “The year is still 2121.”

“Love is Blind” will still carry the same name after it is reproduced, and Lozar will continue to have a vital presence in the production process and beyond. She is keeping her final say in creative decisions and still playing an important part of the play’s rebirth.

“My main role is as a writer, so I’m working on rewriting and I have say in the production process, auditions, and any creative decisions they have will have to go to me,” Lozar said. “So they make all the decisions but the final say is on me.”

The reproduced version of Love is Blind is on a tight schedule, with the final product slated to come out in the beginning of the next year.

“We are having auditions very soon, production season will be all December and it will be presented January 29th, 30th, and 31st. The only public showing is February 1st, and I couldn’t be more excited”.