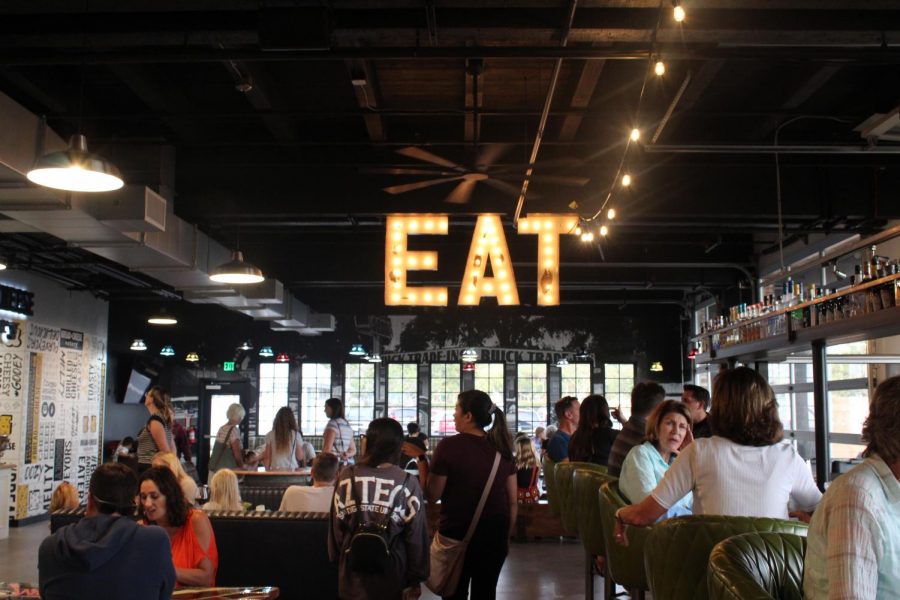 Families and friends gather in the Windmill Food Hall. Even on a Wednesday night like this, the Hall is packed with many hungry customers.

After months of anticipation for their town’s newest addition, families and couples entered the Windmill Food Hall. Each and every person was greeted by the smiling faces of staff from 14 unique vendors. For founder James Markham, the turnout was greater than he could have ever expected.

“We had projections in place where we wanted to hit, you know, per day after six months,” Markham said. “We beat those projections on the first day.”

Established on the eve of Labor Day weekend, the Hall acts as a one-stop-shop for foods of all different cuisines, national and international. From pad thai to rolled ice cream, the venue’s highly inclusive menu ensures that there is something in store for every craving.

“Overall, all of the vendors are super nice,” sophomore Macy Markham said. “It’s just a really fun environment to be in.” Markham is an employee at the Food Hall and daughter of the founder.

Every single eatery has been established within San Diego County, such as Cross Street Chicken from Downtown San Diego and El Puerto Tacos from Carlsbad Village.

“I just wanted to make sure that all of the stuff we were doing was not stuff you could get everywhere else,” the founder said. “I didn’t want any chains in here, and I didn’t want people who had five and six and seven restaurants. These places are supposed to be for the little guy, as their start. Because I mean that was me, one time, right?”

When building the Hall, Markham chose to take the fast-casual design approach. The Hall puts a twist on the traditional mall food court by adding lots of family-friendly games, decor created by artists local to the community, and even dining areas secluded from the main hall.

“They have a room called The Library because it’s like this quiet, dark room in the back, where you still eat,” sophomore and frequent visitor Arden Khanna said.  “There’s books that you can grab and read and do whatever you want.”

To introduce residents of Carlsbad to the town’s newest addition, the Hall has hosted a total of three live music concerts, and plans on commissioning many more. Each performance takes place on Thursday evenings at 6.

Since the establishment of the Windmill Food Hall, Markham has seen residents of Carlsbad connect with one another.

“I had sort of a vision of what I wanted, of who came in here,” said Markham. “I wanted every walk of life: young, old, fat, skinny, black, white, asian. And if you look around, that’s what’s here. I wanted it to be just completely approachable for everybody to come in, and that’s by far the best part.”