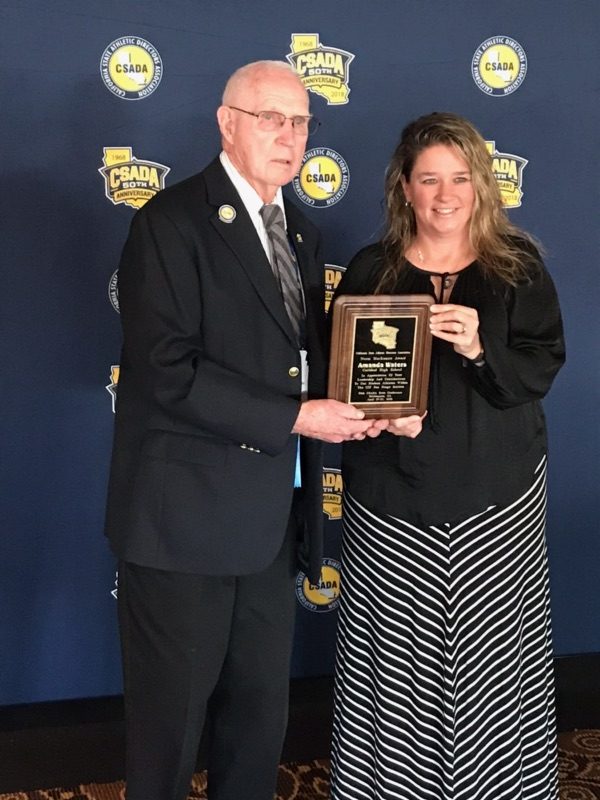 In April of 2018, Carlsbad High School’s athletic director Amanda Waters received the “Norm McKenzie” award. This award, also referred to as “Rookie of the Year”, was presented to Mrs. Waters by the San Diego Section Representative of the State. This gives recognition to the Athletic Director of the Year, for under four years.

Mrs. Waters shares her excitement, experience and the humbling atmosphere she was surrounded by after receiving this award. Over 1,000 Athletic Directors attend this ceremony in the eleven sections they are placed in within San Diego. Every section had a Norm McKenzie winner, which elected Mrs. Waters one of the eleven out of 1,850 people who could be chosen.

“I heard from the San Diego Section Representative of the State and he informed me that I was receiving the Norm Mckenzie award,” Mrs. Waters said. “I had no idea what that meant and it really didn’t hit me until I got out there… At first I thought it was great, it’s always nice to be recognized for what you do, but it’s weird because I’m used to the awards going to the kids so it was weird for me because that’s not really what I’m in the job for.”

The honorable award gives Mrs. Waters recognition for her hard work as the Athletic Director. The humbling experience left her with gratitude and appreciation as she shared her loving remarks for the students and the school.

“It was humbling I guess, you know, sometimes you work and do everything you can do for the students or for the school and you do it because you know it is what you are supposed to do,” Mrs. Waters said.

Receiving this honor allowed Mrs. Waters to reflect back on CHS. Now a Carlsbad local, Mrs. Waters grew up in Maine and fell in love with Carlsbad, the school and community where she now holds a vital position and is a part of the Carlsbad High School community.

“You know I love this school, I love the kids, I love the athletes here, I love our community,” Mrs. Waters said. “My family lives in Carlsbad so it’s amazing especially because I’m from Maine, so I’m from really far away. It’s great, everyone is jealous because they want to live in Carlsbad!”

Mrs. Waters strongly believes in the importance of recognizing all Athletic Directors for their work. She shares her important outlook and why she received this award.

“I think all of us deserve it to be completely honest,” Mrs. Waters said. “I think that the job we have is a lot tougher than people think and I think every AD deserves an award because it validates what we do. But I can tell you in our San Diego section we have some amazing people. So for me it’s humbling to receive it and I think they are just as deserving as I am.”

Mrs. Waters continues to advise students, help Carlsbad, and for that, received the prestigious “Norm McKenzie” award from her work and dedication to CHS. Mrs. Waters is now one of the few honorable people who have been recognized as one of 1,850 people and athletic directors who work hard to help their schools and students.

“I think that we have a great school, great administration, great staff, great students, and I’m proud to say I work here and proud to represent the school,” Mrs. Waters said.