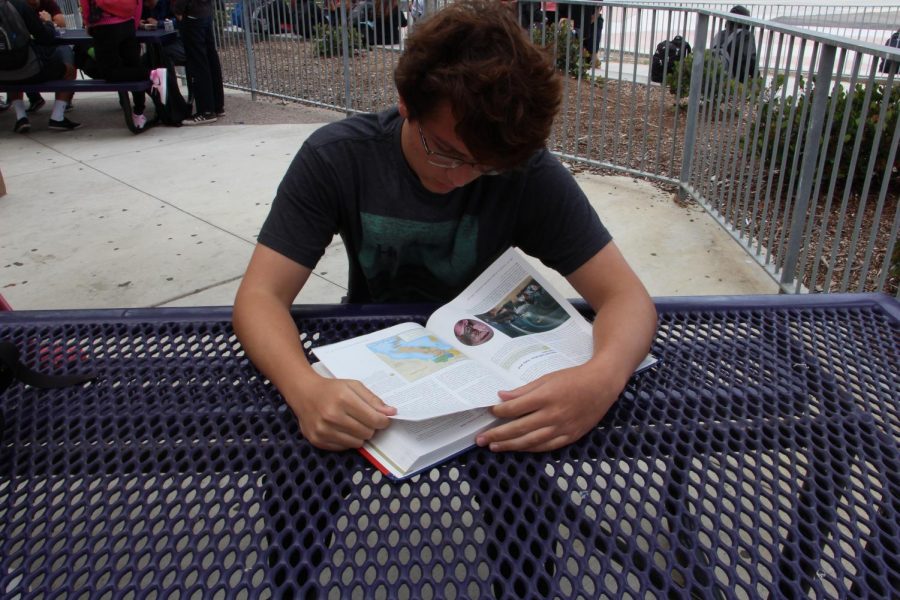 Sophomore Spencer Stabile-Bell studies for the AP European History exam at lunch. The test was held at the Del Mar Fairgrounds on May 18.

From May 7 to May 18, students around the nation took their AP exams. For Carlsbad High School sophomores, these were the first AP exams they had ever experienced. The most popular AP tests among sophomores were AP European History and AP Biology, but some also took tests such as AP Psychology, AP Spanish and AP Computer Science.

The AP European History exam was held on the afternoon of May 18 at the Del Mar Fairgrounds. It was approximately four hours long and included 55 multiple choice questions, 3 short answer questions, and two essay questions. 125 sophomores from CHS took the exam. Of these 125, many felt the test was challenging but still do-able.

“AP Euro was kind of a harder one,” sophomore Edward Gardner said. “The multiple choice involved a lot of analyzation and that was kind of a struggle. There’s just such a wide range of topics they could cover so that also made it tough to study for but I did not feel that bad coming out of it because I did study pretty thoroughly for it.”

Along with studying outside of class, AP European History students readied themselves for the test inside the classroom. The two teachers, Ms. Wentland and Ms. Hetherington, gave four review tests and an early final as well as multiple review activities. Students believed all that review better prepared them for the exam.

“I did part of the stuff they offered in class such as the Saturday study sessions,” sophomore Spencer Stabile-Bell said. “One of them was for the writing section where we practiced writing DBQ’s, LEQ’s, SAQ’s and tips and tricks for that. The following Sunday we went and did a mock exam where we did the whole AP test where there’s the multiple choice, the SAQ’s, the DBQ and the LEQ. Other things that we had to do for class were the review tests where we went over every chapter and all the content so I would’ve probably done less studying if it wasn’t for that. That helped me study all the chapters over again and make sure I knew everything.”

The other most popular exam with sophomores, AP Biology, was held on May 14. The test was structured differently than the AP European History one and consisted of 63 multiple choice questions, six math based questions, two essay questions, and six short answer questions. According to sophomore Nick Francis, Mr. Walker, the AP Biology teacher, prepares his students well for the exam.

“He runs a really tight ship and his class is very hard,” Francis said. “It demands that you put in a lot of work and a lot of effort and I think that translates into being really well prepared for the AP test.”

Other sophomores took AP tests such as AP Psychology, AP Computer Science and AP Spanish but those classes were not as sophomore-heavy as AP European History and AP Biology. Regardless of which class, however, many sophomores expressed confidence after their first AP exams and felt that hard work and studying were the keys to their success.

“The thing I would most recommend is not studying at the last minute, spread it out throughout the whole year and take the AP test,” Gardner said. “Some people don’t take the AP test and think they are really hard but they aren’t, if you study you are going to be plenty prepared.”