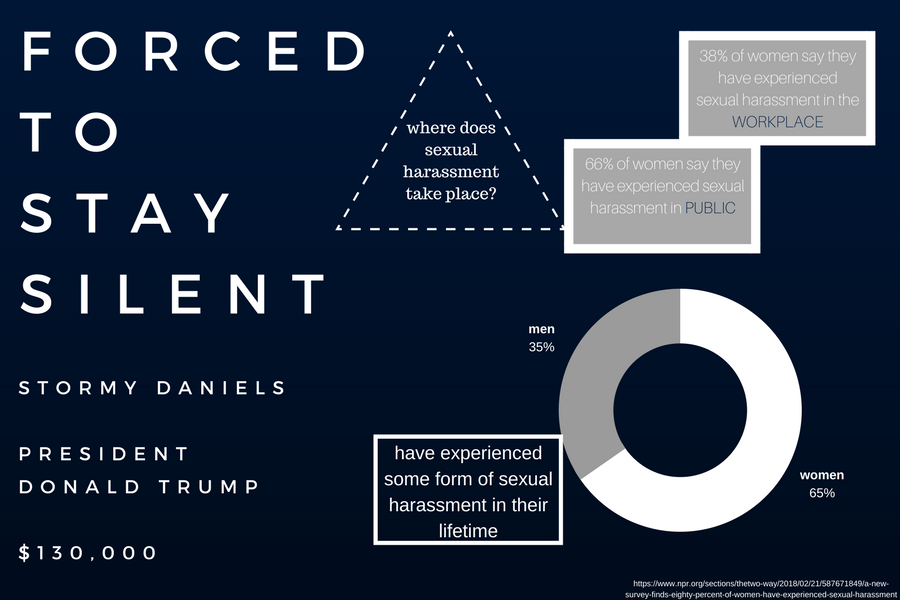 In July of 2006, president Donald Trump allegedly had an affair with star Stormy Daniels. The story is only surfacing now, due to the fact that Daniels had been paid hush money to keep quiet, and that her life had been threatened on multiple occasions about the ordeal. She stated the reason for her violation of the agreement with Trump was “Because it was very important to me to defend myself.” Her appearance Sunday, Mar. 28, on “60 Minutes” was the highest-rated episode of the CBS News magazine show in a decade.

Sources have since stated that they were not surprised such a scandal had come out about Trump, seeing as this is not the only time our president has been accused of sexual misconduct by 19 women, most of them being nonconsensual. However, in the interview, Daniels admitted to consenting to Trump, and acting almost apologetically.

“I had it coming for making a bad decision for going to his room alone,” Daniels said.

Daniels’ case is different than the other stories of women who have come out with their sexual experiences with Trump. She outwardly denies that she did not find Trump attractive and that she also did not want to have affairs with him, though she also admitted everything was consensual. Implications suggest that she was not interested in Trump in any way, which is also different from politician affairs in the past. For example, Ashley Dupré, Rielle Hunter and Sydney Leathers all had something to gain from their affairs with politicians, such as love, fame, power or vulnerability.

Daniels denied wanting anything from Trump. She is not afraid of his power, yet she is afraid for the her and her daughter’s life, which is the only reason she wanted the story to come out.

When walking with her infant daughter to her workout class, a man walked up to Stormy and said to her “‘Leave Trump alone. Forget the story.’ And then he leaned around and looked at my daughter and said, ‘That’s a beautiful little girl. It’d be a shame if something happened to her mom.’ And then he was gone,” Daniels said.

Despite the threat, Daniels still comes out with her story ready to fight for her side of the story and for the public to understand the truth about our president. Daniels fights as Trump does, and, as of now, there seems to be no backing down from either side. Trump has yet to come out with a statement about Daniels’ interview, but the press is expecting to read a passive-aggressive tweet about it soon.