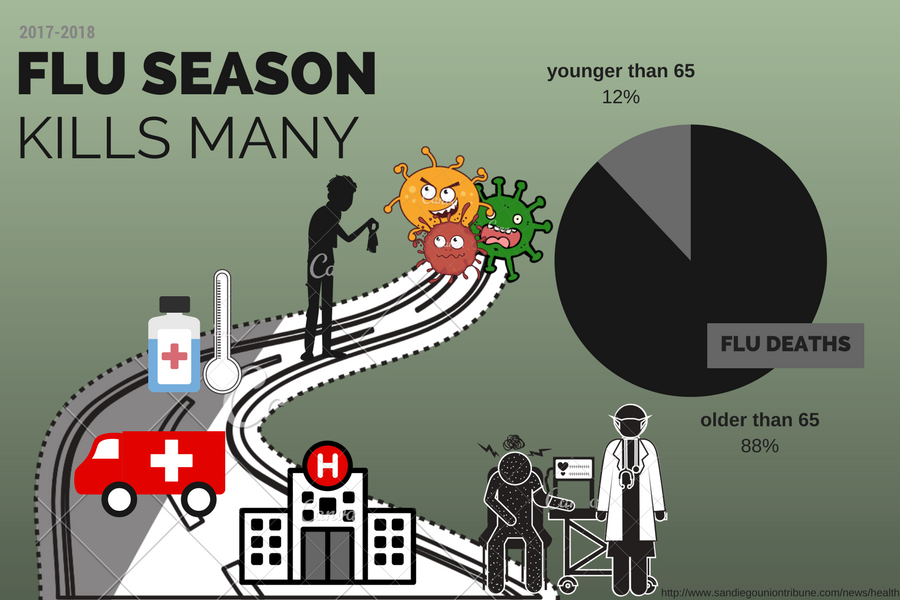 According to The Washington Post, almost 12,000 people have been hospitalized due to the flu this season. This flu season has been particularly worse than previous seasons, considering the rates of hospitalization and mortality.

Not only is it flu season, but other things, such as colds or sinus infections, are also spreading around, causing more people to catch one disease or another. Whether or not it is the flu, people are still suffering through their sickness.

“I believe that the weather changes came right at the time that the strain started getting spread around,” school nurse Mrs. Jordan said. “This strain is an even stronger strain. I’m also hearing that we have another disease, where people are being misdiagnosed, just assuming that it was the flu.”

Many students at Carlsbad High School got the flu this year, saying that it was much worse than previous years. Recently, the flu was declared an epidemic.

“I get sick a lot, so I was not surprised when I got the flu again this year,” freshman Grace Mills said. “I think this time the flu was a lot worse than the years before. I was throwing up and I had a high fever. It was awful I couldn’t get out of bed for three days.”

Flu season began back in October, but many people did not get sick until December or January. One unlucky student, sophomore Victoria Hrisanthopoulos, caught the flu during winter break.

“I had a high fever of around 103 for about a week during winter break,” Hrisanthopoulos said. “I was even sick on Christmas.”

Although for some it may be too late this year, Mrs. Jordan shares several tips to help students avoid the flu in the future.

“Number one is hand washing,” Mrs. Jordan said. “Number two is always covering a sneeze or a cough, preferably with your arm, not your hands. Drink lots and lots of water, and be sure you eat foods that have the elements we need in it, like things that have magnesium, calcium and potassium.”

The virus this year has been spreading very quickly nationwide, and many people could have prevented it by enforcing precautionary measures.

“I think a lot of us are not taking care of ourselves, and we have a lot of weak systems, so we don’t have the immunities built up to fight it off,” Mrs. Jordan said. “If you know you have the flu by the symptoms of a fever, headache, aching all over, and possibly the sore throat, you can go to the doctor and get a medication called Tamiflu. They will only give it to you within the first 24 hours of getting your symptoms. It cuts your virus in half.”

Sick students sometimes let the stress of school get to them while they are home sick, which is not helping them recover faster. While at home sick, students should focus on recovery and not worry about the school work they are missing, as this will be counterproductive.

“I think more so than affecting me here in my office, it’s affecting how they’re doing in school,” Mrs. Jordan said. “They’re getting behind, and that stresses them out, then it makes them weaker and they don’t get better faster. It just kind of comes right back around.”