Mass shooting occurs during a festival in Las Vegas. 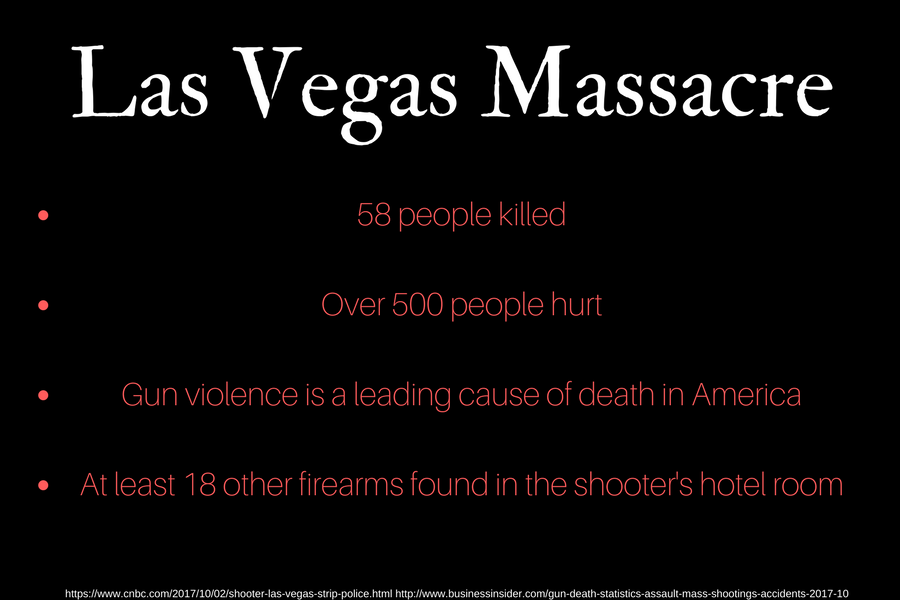 On October 1, a gunman named Stephen Paddock opened fire from the Mandalay Bay hotel into a crowd of 22,000 people attending a 3-day Route 91 Harvest country music festival. This marked the nation’s largest mass shooting in modern history, with 58 dead and about 500 injured.

Paddock, 64, travelled to Las Vegas from his residency in Mesquite, Nevada. After the shooting, he retreated back into his hotel and committed suicide by gunshot. He was on the 32nd floor of the hotel, and soon after, the SWAT team arrived opening Paddock’s door with a controlled explosion. Prior to the crime, Paddock hadn’t had any criminal history other than a ticket. The motives of Paddock committing this mass killing are still unknown. So far, the crime has not been linked to any terror groups and it has been considered a “lone wolf” act.

Despite Paddock’s lack of association, ISIS’s Amaq News Agency has claimed the responsibility of the murder, naming him a “soldier of the Islamic State.” This statement has been taken with a dose of salt, as ISIS has recently been claiming responsibility over many acts that were not terrorist related.

Paddock was a retired accountant with a pilot license. His father, Benjamin Paddock, was a well-known bank robber, and was once on the FBI’s 10 most-wanted list. According to the Eric Paddock, the gunman’s brother, he did not have any religious or political affiliations.

To help with the issue, Mandalay Bay Resort has announced that it will provide crisis counselors for any guest or employee at or involved with the hotel, that was affected by the massacre. This has been set-up via phone number and in-person counseling is also an option.

In an effort to raise money for the victims and families of the massacre, Clark County Commission Chair from Las Vegas, Steve Sisolak, has created a GoFundMe that has raised over $9 million.