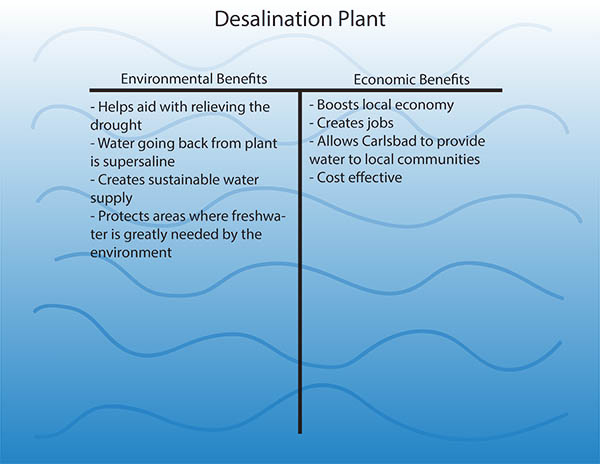 Tampa, Florida was the first to look towards desalination as a source of water in the United States. Now, Carlsbad is following their footsteps. With six years in the California permitting process and over ten years planning, the Desalination Project for Carlsbad has reached final approvals from every required regulatory and permitting agency in the state. While currently still under construction on the land adjacent to the Encina Power Station by the five freeway, the purified water created by this plant when completed will serve to provide water to the San Diego county.

“Bud Lewis [former Carlsbad mayor] was really ahead of the curve on this one,” A.P. Economics teacher Mr. Hendricks said. “Not only is this providing a new source of water, but we can use this as a tool to charge other cities for the supply of our water. The economic benefits that we’ll receive will likely be astounding.”

During construction, an estimated $560 million was spent locally as well as the temporary creation of 2,500 jobs. Once operational, the plant will foster 25 full-time employees and 175 indirect jobs. Annually, there will be $50 million in spending throughout the region and around $5.3 million in incremental property and business tax revenues per year.

“From an economic standpoint, our community as well as those around us can benefit,” Hendricks said.

According to the Carlsbad Desalination Project website, the process of water purification starts with treating seawater with a pretreatment system in order to remove any microscopic impurities. Then chemicals are added for additional purification; this water is sent through a reverse osmosis system (a series of filtration membranes that further purify the water). After this is complete, every one of two gallons of seawater taken in becomes high quality fresh water. The removed salts along with the other gallon of seawater is released from the power plant as it re-enters the ocean.

“I think there are better ways to create water than the desalination plant,” A.P. Environmental Science teacher Mr. Muilenburg said. “It costs a lot of money and it uses a lot of electricity. We also do not know the true consequences of the hyper-saline water that will be put back into the ocean.”

According to Poseidon Water, the company heading the desalination plant, if the best technology and design available is used then they can minimize and avoid major effects to marine life.

“The biggest reason I am against it is because I think there are other ways to save water,” Muilenburg said. “For instance, taking the water we have treated at the sewage treatment plant and cleaning that well enough to either be used to water our lawns and common spaces is an alternative. Or like in Orange County which we [the A.P. Environmental Science classes] saw a 60 Minute episode where they let the treated water from the sewage treatment plant go back into an aquifer and then back into the ground where nature cleans it and then pull that water back up for use.”

Regardless of the economic benefits and environmental effects, with the full capacity to deliver up to 50 million gallons of water per day, this new form of water for Southern California remains optimistic in a time of severe drought. San Diego can expect the plant to be ready for delivering water by November 2015.