CHS debates their way to the top 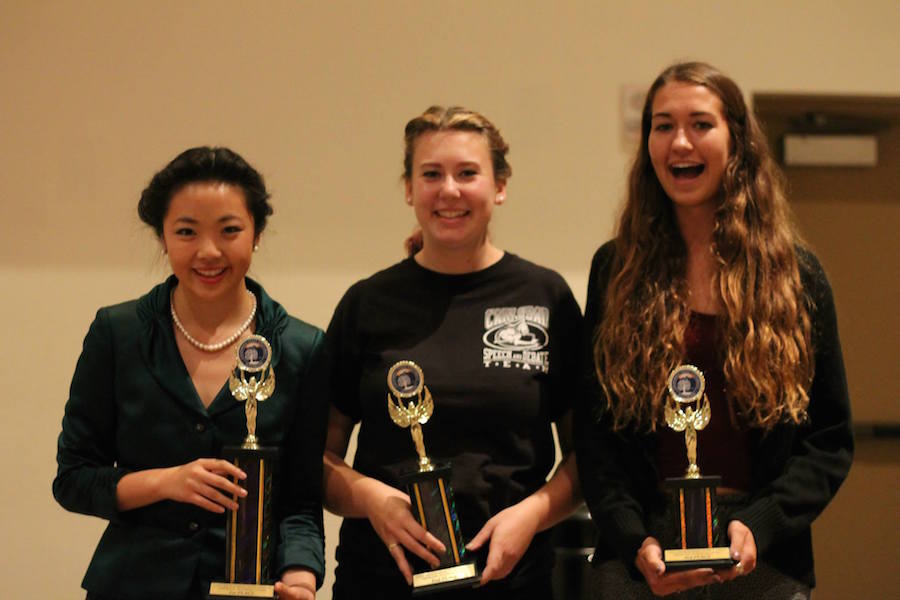 Seniors Isabelle Lee, Kitty Knorr, and Sarah Sheets celebrate their victories in their respective events at the Fullerton debate. The team as a whole took home first place at the tournament.

From Oct. 17 to 19, the Carlsbad High School speech and debate team competed in a tournament at Cal State Fullerton, along with 70 other schools from California. At the tournament, actor Bob Odenkirk (who plays Saul Goodman in Breaking Bad) served as one of the judges who evaluated multiple Carlsbad students. This was just one highlight, along with many others.

“Typically at our normal competitions, we only compete against people in San Diego, but in this tournament, we faced people from all over the state,” junior Samiksha Ramesh said. “Their styles were different; it was interesting to see but also hard to compete with.”

In order to prepare for big meets like this, students dedicate hours of time practicing using different techniques.

“They get mentored by experienced speech and debate kids, which is kind of unique to our program because we have 150 kids on the team and only one adult, so the students themselves become the teachers of the various events,” speech and debate coach Mrs. Curtis said.

Some may be skeptical of the method of peers teaching each other, but at the match, it proved to be an effective method.

“One of my novices won the tournament and that was the best feeling ever because he got first in every single round in varsity,” senior Sarah Sheets said.

The novices did well, but all of Carlsbad seemed to dominate the weekend.

“We won the tournament so that was by far the best part,” Sheets said. “We have done well before but we have never gone through a whole circuit tournament that had college judges that actually know what they are talking about.”

Winning was a great for the students, but spending quality time with each other also proved to be a big part of the trip.

“I always enjoy the away tournaments because it’s a bonding time for the kids as well as competition,” Curtis said. “They get to know each other more as people by having fun, laughing and spending time with each other outside the rounds.”

The speech and debate team has achieved some impressive wins so far and has a promising future in the year to come.

“Last year, we placed 5th in the state, so we are definitely on a role,” Ramesh said. “We are starting out stronger than last year, so I think that we are ready to move up.”