The Green Dragon Tavern dishes out a history lesson 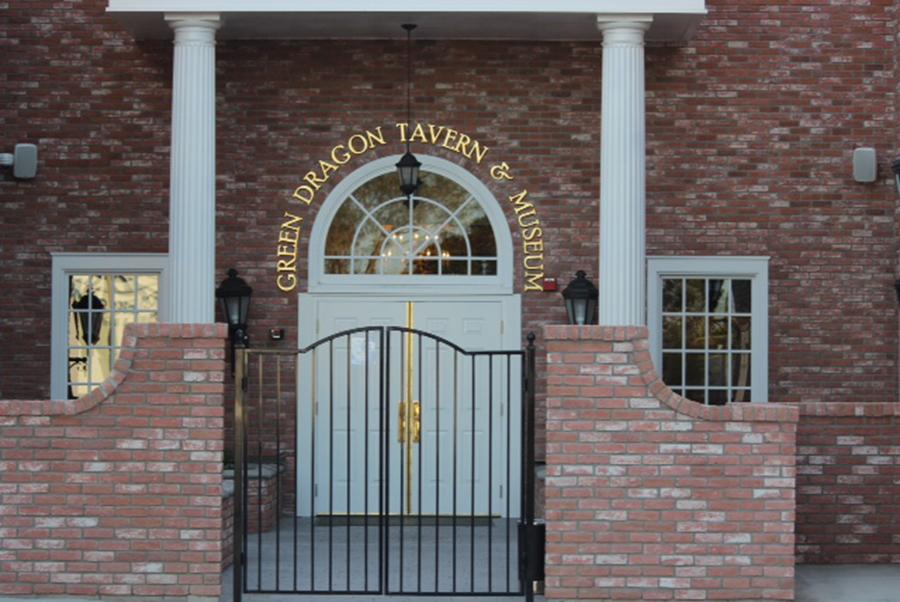 The front of the Green Dragon Tavern. The whole building is designed to look very colonial, increasing its authentic feel.

Resting at 6115 Paseo Del Norte, a piece of history lingers next to the freeway. The Green Dragon Tavern in Boston is sometimes called the “Headquarters of the Revolution” by historians. Now, the West Coast has it’s own “Headquarters of New England Dining.” In the original Tavern, several secret groups met, including many of the patriots that would come to be forever-linked with the foundation of the United States. The building itself has since disappeared–but that doesn’t stop Carlsbad from continuing it’s legacy.

Both an American History Museum and a restaurant –The Green Dragon Tavern serves dishes and smiles.

Named after a very famous Boston tavern, The Green Dragon played an important part during the War of Independence. Established in 1654, the restaurant has welcomed some big names, including Paul Revere, John Hancock and Daniel Webster. It has even been alleged that the Green Dragon hosted the meeting for planning the invasion of Lexington and Concorde. However, soon after, these plans were overheard, leading to the famous ride of Paul Revere.

Now one might question the origins of the restaurant’s name–well, there’s a story behind that as well:

The tavern itself was actually in the basement, while the upper rooms were used for meetings, weddings and parties. And in 1765, the St. Andrew’s Lodge of Freemasons in Boston bought the Green Dragon Tavern on Union Street to use as a meeting-place. For a while, the lodge tried to rename their building “The Masons’ Arms,” but the Green Dragon stuck because of the striking carved sign over the door.

The decor of the Green Dragon Tavern comes from a watercolor sketch by John Johnson, a Boston painter during the Revolutionary War. Although the building itself disappeared in 1854, the spirit of Americana thrives on Paseo del Norte.

The pilgrim-themed dining room and a more formal room serves dinning accommodations. The two-story tavern acts as a casual restaurant, decorated with fireplaces, televisions and a vaulted ceiling.

Showcasing a privately-owned collection of historical documents and educational exhibits, the Tavern also serves as a museum. And there is no reason not to stop by this historical hot spot–admission to the museum is free.

Establishments like the Green Dragon Tavern defies preconceptions: embracing our nation’s history doesn’t necessarily mean sitting in a classroom. History can be quite flavorful. Stop by the Green Dragon for a spoon full of Clam chowder, a sandwich named after a founding father and embrace the piece of history sitting in our backyards.