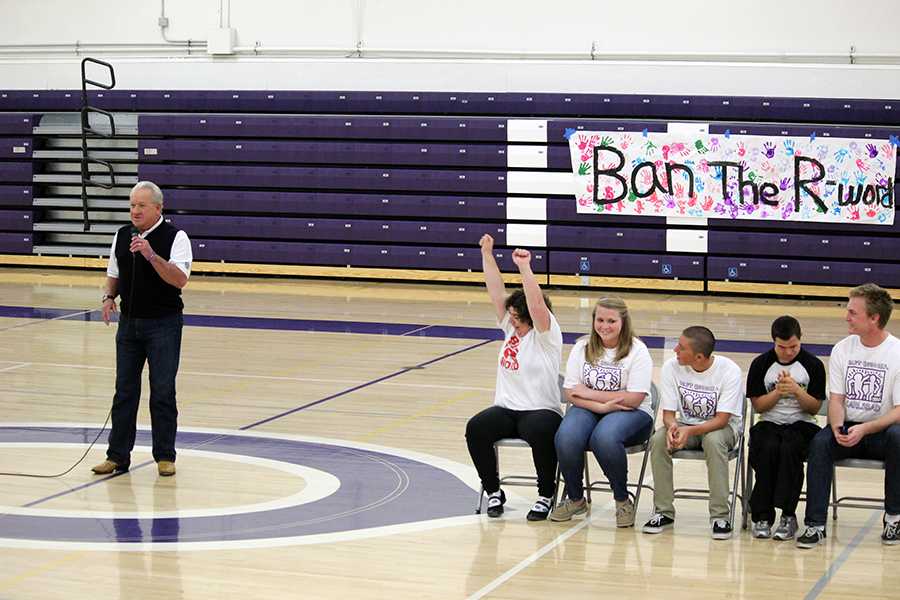 Ex-Padres player Randy Jones spoke at the Ban the R word Assembly held in the old gym on Thursday Apr.24. Not only did Best Buddies have cool giveaways like a Polaroid Camera, but they also provided everyone with Lola's burritos!

The word “retarded” is used in conversations every day, especially in high school. People treat it like any other word, or even as a joke, but what they don’t realize is that this word hurts people.

“We are trying to ban the R word because kids don’t really know how offensive the word can be,” junior Sami Hull said. “It’s important to become aware of how bad this word can be, especially since a lot of kids with disabilities are mentally retarded. It’s not fair to them if people are just throwing around this word.”

Kids with special needs look up to other kids on campus, so when masses of students attended this assembly, they were overjoyed that all of these people cared.

“The buddies really appreciate everyone coming out and supporting them; it means the world to all of these kids,” junior Samantha Avalos said. “Also, we want to show everyone that these kids are people too, and don’t want to be defined by one stereotypical word.”

During the assembly, the Best Buddies handed out Lola’s burritos to attendees, but for the club members, this assembly held a deeper meaning than serving Mexican food. The assembly was meant to show students what kids with special needs must endure every day. Kids with special needs can live a normal life just like them, but being defined by one word does not make it any easier.

“I think that this assembly is really important for kids to come to,” Hull said. “Before kids come, they think that the R word is not a big deal to use, but then they see and talk to the kids with special needs and can actually see that this word can be really offensive to them.”