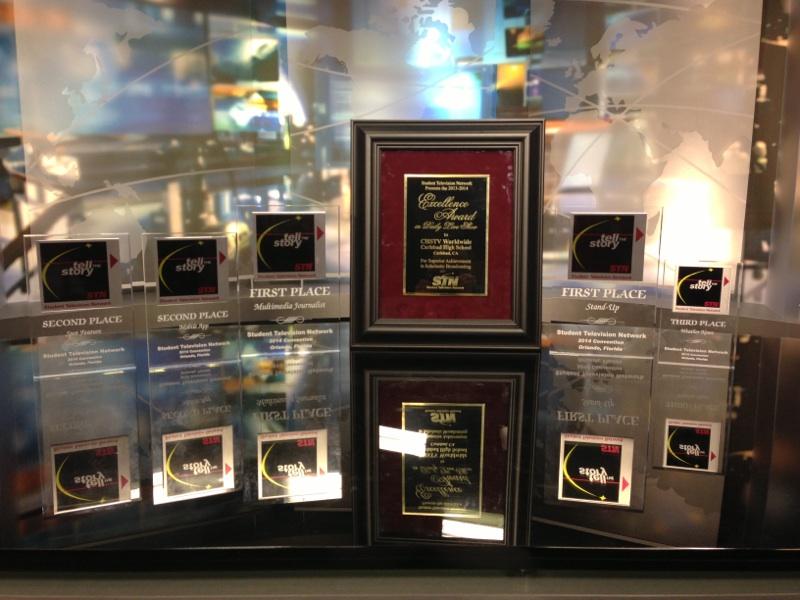 These are the most basic components of the annual Student Television Network Conference. From March 20-23, thousands of students gathered together in Orlando, Fla. with one common interest: student broadcasting.

Carlsbad High School’s broadcasting students flew out to the STN conference on March 19. For CHSTV, there is always pressure to live up to its name.

“We do have a reputation,” senior and Executive Producer Hannah Evans said. “Our teacher is the president and started it up. People actually know us because we are a really big group and have won a lot of awards.”

Each year, there is a theme for the conference to inspire students and teachers alike.  The 11th annual conference theme was “Keepin’ it Real,” which promotes students to maintain the integrity and truth of reporting a good story.

At the conference, there are more than 80 sessions about film and the journalist broadcasting industry to attend, but students look most forward to the competition– the biggest and most strenuous one being “Sweet 16″.

“My favorite part is ‘Sweet 16’,” Evans said. “We have 16 hours to produce a broadcast revolving around one word.  The word was ‘international drive,’ which is actually a big tourist strip in Orlando. I was the producer, and it was really fun to lead.  It was the best one we ever did.”

These competitions require a lot of practice and training, but competition is nothing new for the CHSTV crew.  They work diligently all year, so they are fully prepared when the STN conference rolls around every year.

“Even before we go, we do constant practices for every competition event,” Evans said. “Every day, we practice for Sweet 16 with our live daily broadcast at school. We have tons of practice and editing in order to be prepared for the time-pressured situations there. Mostly though, we just keep doing what we do.”

There practices have paid off; after competing in an array events, CHSTV has won several prestigious awards. They won the Award of Excellence for the sixth year running for best daily live high school broadcast. Other awards included first place in Stand Up, first in Multi-Media Production, three second places, one third place and two honorable mentions.

Students left Orlando with an overwhelming sense of achievement and inspiration. CHSTV came back to Carlsbad–once again, carrying its legacy of the best daily live student broadcast in the nation.