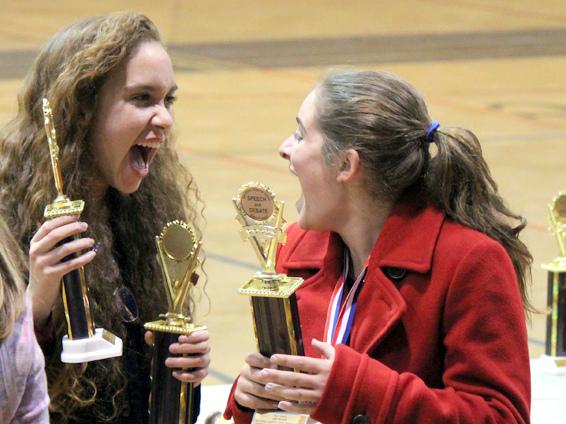 The Carlsbad High School Speech and Debate team carries a tradition of excellence. This year the team reached the top 1% of the nation’s programs and stands as an ideal model for the other teams in San Diego.

For the second year running, the Speech and Debate Team has won the League Championship, and are projected to make it a hat-trick. The team has defended its top ten state ranking over the recent League, State and National Championship.

“Due to consistent dedication and daily practice, our team is beyond the top 70 of the nation,” junior Rohan Deshmukh said.

Speech and Debate demands its competitors to maintain focused and powerful for tournaments that may last up to fourteen hours -the fundamentals for success greatly differing from the general understanding.

Achieving in Speech and Debate requires students to have a good understanding of not only the subject matter, but also the most effective way to convey the desired emotion or argument to a judge. These skills don’t come easily, and unique to Speech and Debate, transfer down directly from generation to generation.

“The focus of our team is driven primarily by the captains of our teams,” Deshmukh said. “We are dedicated to our captains because our captains are who motivate, teach, and inspire us to achieve our goals.”

The process began years ago when team coach and overseer Mrs. Curtis first instructed her students on the art of Speech and Debate. Since then the team has grown astonishingly to over a hundred members, far too many for one instructor, and so the nature of the beast has changed; now, event captains leads specific practices at lunch and after school.

Speech and Debate continues to be a consistent place of achievement and drive. Competitors gather from across the nation for grand scale competitions which may average over 150,000 students. Every single student aims to succeed and put out their best work.

“Most kids from Carlsbad do really well,” Rao said. “But, other kids from other schools don’t do half bad either.” To shed some light on this, in their recent San Diego competition Carlsbad students composed over half the finalist (the other half included the other twenty one schools in attendance).

The community behind Speech and Debate, spearheaded by Mrs. Curtis, supports a growing group of students of all grade levels and backgrounds. The success of the team can be attributed to the diversity of it’s members.

“We all follow the same rules, we operate similarly to a sports team in many ways,” Rao said.

“Speech and Debate helped me discover my own confidence. Not just in speaking, but in general,” sophomore Alex Orimoloye said.

From the student in need of a home, to  record setting competitors such as Natalya Philips and Davin Curtis, the Speech and Debate team has a place for everyone. It harbors a sense of community that enables members to excel from county to state levels -such success as that seen this weekend at El Camino where they more than doubled the score of the second place team.

Having established such a successful and dynamic program, the task in front of the Speech and Debate team is whether they can uphold its legacy, and retain its gifts for students to come. The key to this lies in the hands, minds, and voices of its members.