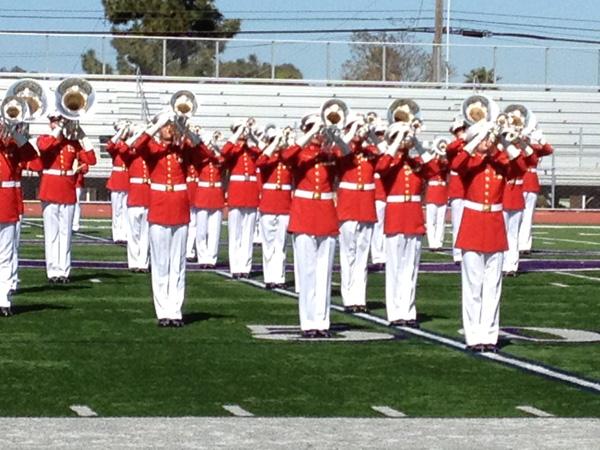 Teachers and students piled into the home-side bleacher of Swede Krcmar stadium, waiting in anticipation to see the U.S. Marine Drum and Bugle Core along with the Silent Platoon team perform March 8 during third period. Many students heard of their excellent show last year and were excited to attend this year’s performance.

“I’m super excited our teacher let us go to this assembly. I can’t wait to see discipline and some sexy men in uniform,” senior Bree Jemison said before the event.

Everyone was respectful, listening in awe to the Drum and Bugle Core’s 2012 edition of Music in Motion. Students could relate to the music selection because it contained the familiar tune of “When Ants Go Marching,” a Grease Medley and the Official National March for the United States.

“The trumpets duet of Summer Nights from Grease was so cute. One trumpet played like they were singing Sandy’s part and one was playing like Danny,” Senior Haley Hendricks said.

Later, the Silent Drill Platoon took the field to perform, students were most excited when Lance Cpl, the silent platoon general, interacted with all the platoon soldiers in a line by throwing their 10.5 lb guns in the air.

Principal Dr. Steitz had the honor of standing on the field while both the U.S. Marine Drum & Bugle Core and Silent Drill Platoon marched by. After the performance high scholars herded onto the turf to meet and great the performers.

24-year-old Matt Christianson started playing the bugle in his high school band. He has been a part of the U.S Marine Drum and Bugle Core for two years. 23-year-old Mike also played snare drum all throughout high school.

“I marched Drum Core previous to the Marine Core and had a friend who convinced me to join,” Christianson said. “If you would have asked my five years ago if I would be here now, I would be shocked but with doing drum core and music all through high school it prepared me for this addition, and here I am today enjoying this experience.”

The organization not only preforms at schools around the country but also travels outside of the United States to Japan and Guam. In the summers they perform in DC to the public in an event called Friday Night Parades. Many musicians admit they love performing in Southern California and hopefully they will return next year to Carlsbad and perform again.