The Carlsbad Gap: a retrospective of a world-famous skating locale on its final day 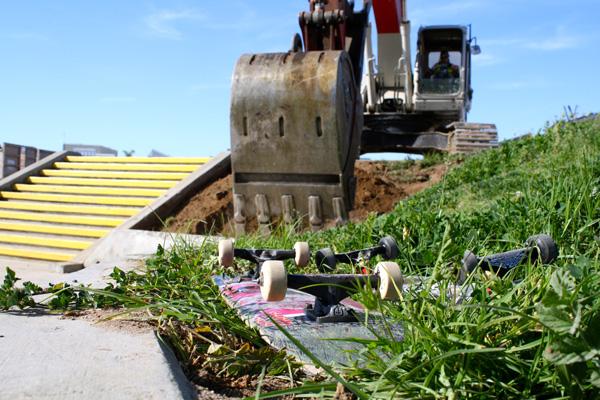 The famous Carlsbad Gap, located on the south side of the Carlsbad High campus, was demolished on Feb. 23 in a $86 million renovation project to update the 54-year-old school and make way for the new student parking lot.  The removal of the challenging jump marks the end of one of the most historic skateboarding spots in the world.

Featured in countless professional skate videos, magazines and photos, the gap’s fame is internationally known by every skateboarder and requires bravery to even attempt a simple ollie.

“The gap is crazy. It’s a big part of skateboarding and I look up to the people who skate it,” senior Christian Foley said. “If you skate, you know about the Carlsbad Gap.”

The Carlsbad Gap is unique from any other skate spot because of its difficult obstacles.

First, at the end of the slab of grass, there is a wall jutting up to meet the skater, challenging him to clear it.

Next, there’s a crack at the top and the bottom that skaters must avoid.

Finally, there’s the infamous uphill landing. The concrete has an upward slope, making it practically impossible to roll away. It creates a huge impact which throws skaters to the floor time after time, leaving bruises, and, for the unlucky, broken bones.

Professional skateboarder Kris Markovich, the first to land a jump, even admits that the Carlsbad Gap has defeated him countless times.

“If you’re one of the lucky humans to make it within the first couple tries, and you walk away unscathed, and you’re riding away, there’s no greater feeling than that,” Markovich said. “There’s been several times where I’ve walked away from here just beat up.”

An optical allusion, the obstacles of the Carlsbad Gap aren’t obvious on video. For people who have never seen the gap in person, they cannot fully grasp its uniqueness.

“There’s people that watch it on video and think it doesn’t look that big because its not really that big, but there’s just the other elements of it,” Markovich said. “Until you’re actually there and actually see it, feel it, jump down it, you’re never going to know.”

Many of the best skaters from around the world traveled to Carlsbad just to attempt the jump. Each newly completed trick brought a higher level of difficulty as skaters tried to out do anybody before them, nailing the most insane tricks nobody would consider trying.

“My favorite trick that’s been done down the gap is Kris Markovich’s kick flip because he was the first one to get a real trick down it,” junior Christian Leone said.

The gap was put on the map by Markovich, who was the first to kick flip and roll away from the gap 18 years ago. Nobody ever tried more than the basics until Jeremy Wray broke the basic trick seal with a frontside 360 in his part in the Plan B Skateboards Second Hand Smoke video.

“When we skated it back when I kick flipped it, that time we were there it wasn’t even the Carlsbad Gap. There was no allure to it,” Markovich said. “There was nothing special about. It was just a gap.”

Wray’s frontside 360 was recognized by everybody in the skating industry. Even professional skateboarder and Carlsbad High School graduate Kenny Hoyle admires his game changing trick.

“If you watch [Wray’s] back heel down it, you wonder how did he make that so easily?” Hoyle said. “It looked so easy. He landed it perfect.”

Since then, every big name in the skating industry wanted a taste of the infamous gap, starting a race to land the next biggest trick. As a proving ground, skaters came to the gap to make a name of themselves and to be seen on the skateboarding map.

“You can do a trick down something, but if you do it down the Carlsbad Gap, then it’s like okay, you’ve done something that’s of some importance,” Markovich said.

For the past 18 years, the Carlsbad Gap has challenged skaters from across the globe, pushing them to their breaking point mentally and physically, daring them to try one last trick.

On Feb. 23, the gap was demolished, leaving only concrete rubble in its place. Broken bones heal and bruises fade away with time, but the notoriety of the Gap’s trials and the experiences tackling the daunting obstacle will endure in the minds of the world’s most famous skaters.

“I was just out skating street and we saw a couple of things there and then I just felt obligated to jump it because I was there,” professional skateboarder Tony Hawk said. “For me, I remember jumping it and it was frightening.”

For more information on end of the Carlsbad Gap check out these links:

Article: The Carlsbad Gap achieves fame beyond the grave