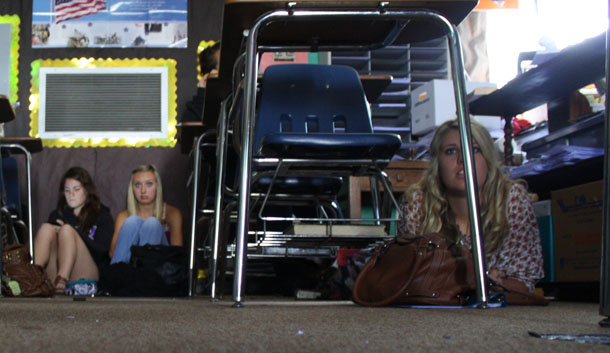 At 11:50a.m., an email was sent from the district to the parents. It simply said: “This is a quick note to let you know that we directed schools to lock down due to reports of a safety threat. We were rapidly able to determine that there was no credible threat and ended the lock down within a few minutes. Thanks.”

CHS students sat in the dark for one hour, waiting for an ‘all clear’ from authorities. Promptly at 12:00 p.m., the lock down ended.

According to various news sources, all of the schools in the Carlsbad Unified School District were put on lock down when an anonymous parent received an email on her phone saying somebody was going to be on school campus with a gun. No target was specified.

To ensure that the threat wasn’t credible, police checked out all campuses district wide and even increased patrols near 15 schools. Nothing was found.

Carlsbad Police issued a press release stating, “At 11 a.m. an unidentified  parent received and unfounded alert through their mobile device, apparently intended for students at Georgetown University (Washington D.C.), warning of a Carlsbad Campus lock down, due to a possible man with a gun on campus.”

Nobody was injured or arrested during or after the lock down.