JUULs find their way to Carlsbad 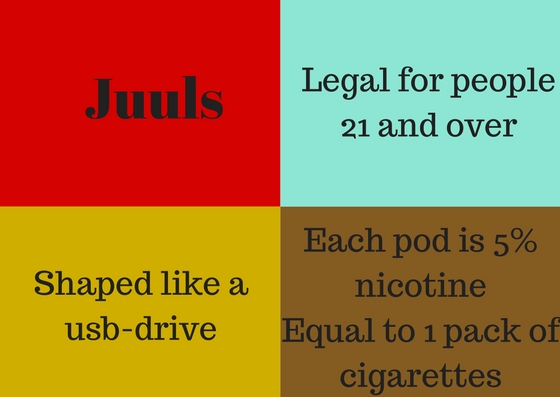 The dangers of a cigarette is common knowledge. High schoolers have been turning away from the cancer provoking killers as more facts and education are released about the harmful effects from a few puffs of smoke. However, as technology improves, an increase of foreign devices are trending across the nation such as vapes and mods. Recently, a new device, taking the shape of an elongated flash drive and goes by the name of a “JUUL,” has been capturing the interest of many high schoolers due to it’s price, taste and the small size making it easier to hide.

“I think kids are using them because they are so easy to conceal, the way they look makes it not look illegal, so it’s easier for a student to smoke from a JUUL than a cigarette,” senior Emily Dewhurst said. “I think the JUULs are a trend. It’s always the case until the next thing comes out.”

As a JUUL is a newer smoking device on the streets and on campuses, many users lack the knowledge of what they are actually consuming. At the top of  the device, a “pod” serves as the mouthpiece and also contains the juice which is inhaled. The official JUUL website states that one JUULpod contains 0.7mL with 5% nicotine by weight which is equivalent to one pack of cigarettes or 200 puffs. The addictive effects of nicotine keep kids hooked leading to an even higher consumption of pods, as well as start to take a toll on your bank account.

“When you smell a cigarette, kids associate that smell with ‘gross,’ but when you bring in these attractive smells, kids are more interested. Especially when you get to choose your own flavors it makes it more appealing,” Dewhurst said.

Although consumers should be educated on the reality of what they are doing to their bodies, teachers and people who are there to help guide them must also be educated too.

“It is important to educate teachers on this subject,” vice principal Mr. Liebentritt said. “We are trying to keep them current and up-to-date with the fact that the science is changing faster and faster. It went from mods, to the pens and now to the juuls. It made it easier for students to do unhealthy things and the teachers need to be aware of that so they can help guide students into making good choices. Most teachers did not have an idea of what they were prior to the training.

Adding on to the surprisingly large consumption of nicotine, the amount of chemicals going into airflow and lungs can have serious harmful long-term effects. Since a JUUL device is so brand new, doctors have a hard time predicting the amount of diseases the hazardous chemicals can bring on to your body.

“I don’t think people understand the true health hazards of JUULs. They just assume they aren’t that bad for you. But the nicotine and chemicals are extremely harmful for your body and some kids go through pods in less than a day,” senior Olivia Kelly said. “I think out of the general population at the school, there are more people who use them, compared to those who don’t use them.”

As students are hooked due to the nicotine, it is becoming a serious issue on campus. The legal age to smoke in California is 21 so when students are caught with illegal substances (JUULS), they can face serious consequences. When a JUUL is confiscated from a student at school (and yes, the parking lot is included), the first offense results in Saturday school, and the second offense will lead to suspension.

“I think kids are interested in JUULs because it makes them look and feel cooler. It’s the fact that they know they are doing something wrong and getting away with it draws them more to smoking the pods.” Kelly said.

It is easy to fall into the latest trends and the “new cool thing”, but students fail to understand to harmful long term effects of the chemicals and nicotine they are consuming. At a young age, it is common to feel invincible, like all the tragic things that are streamed on the news or passed along throughout the community “won’t happen to me.” We just want to remind you that just because nothing is wrong with you now, no one can predict what will happen in the future and for your well-being to recognize what you are consuming and if it will be the absolute best for you in the end.