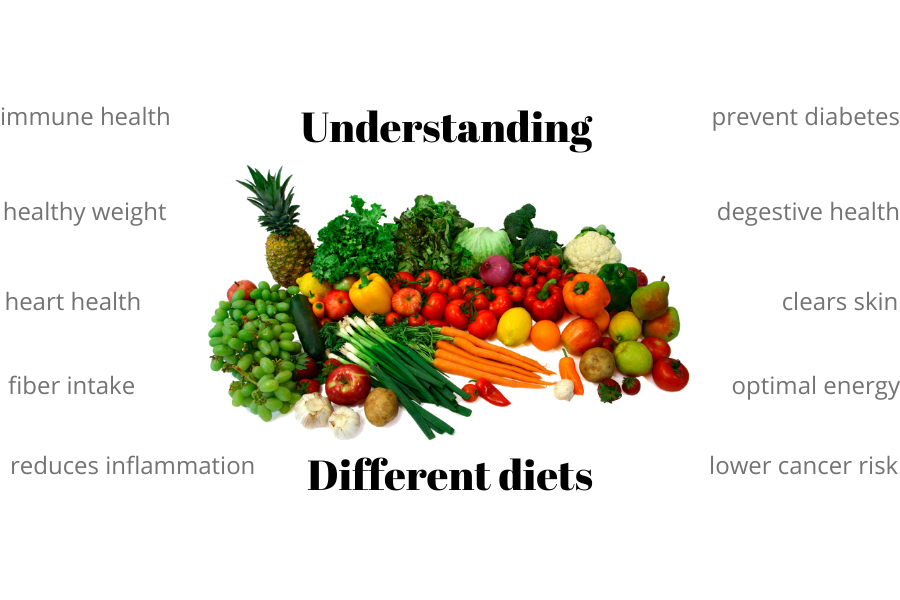 Dietary terms like vegan, vegetarian and pescatarian have had their benefits researched for years, however, “flexitarian” and “raw” diets are relatively unknown. While these diets grow in popularity, many are unaware of what they mean, what one might eat and if they are suitable for a high school student.

The first diet many are familiar with is vegan or plant-based, which excludes any animal product from one’s diet. This includes any meat, poultry, seafood, dairy, eggs and for some, honey. Someone who eats plant-based may have a diet consisting of vegetables, grains, nuts, fruit and legumes. The philosophy which follows veganism focuses on fighting animal cruelty in any form. Organizations like PETA are known for this and their activity in promoting a vegan diet.

Another popular diet is vegetarian, which can be considered the more flexible form of non-cruelty eating. Being vegetarian means to exclude any meat, poultry and seafood from one’s diet while still eating dairy, eggs and products like honey. A vegetarian diet will be similar to someone who is vegan, while allowing for more flexibility, with similar benefits.

Similar to a vegetarian, pescatarians exclude the meat of animals such as chickens, cows and pigs while allowing seafood in their diet. Someone who is pescatarian will eat similar to a vegetarian and vegan while occasionally eating seafood. This provides people who are not willing to cut all meat, eggs and dairy from their diet to potentially contribute to fighting animal cruelty.

While some of these diets have been around for a longer amount of time, the “flexitarian” diet has less specific research. One’s objective with this diet is to eat mostly plant based food while allowing meat “in moderation.” The philosophy behind flexitarianism is about being conscious about your diet while allowing for more flexibility. Since a flexitarian focuses on eating mostly plant based, the benefits are similar. A flexitarian diet also helps to prevent diabetes and promote healthy eating for a longer life.

Another less common diet is the “raw diet” which consists of eating unprocessed, whole, plant-based and organic foods. This implies that one may be vegan, but does not necessarily mean everything they eat will be uncooked. The goal for someone who eats with the raw diet is to eat food in its natural form. A raw diet has similar benefits to that of a flexitarian and plant-based while also supporting digestive health, clear skin and optimal energy from foods.

Although options are unlimited when it comes to what one can eat, it is important to make sure your diet works well with your lifestyle. Before changing your whole diet to one of the options above, consult with a doctor as well as someone in your family, especially for anyone who is young and still growing.