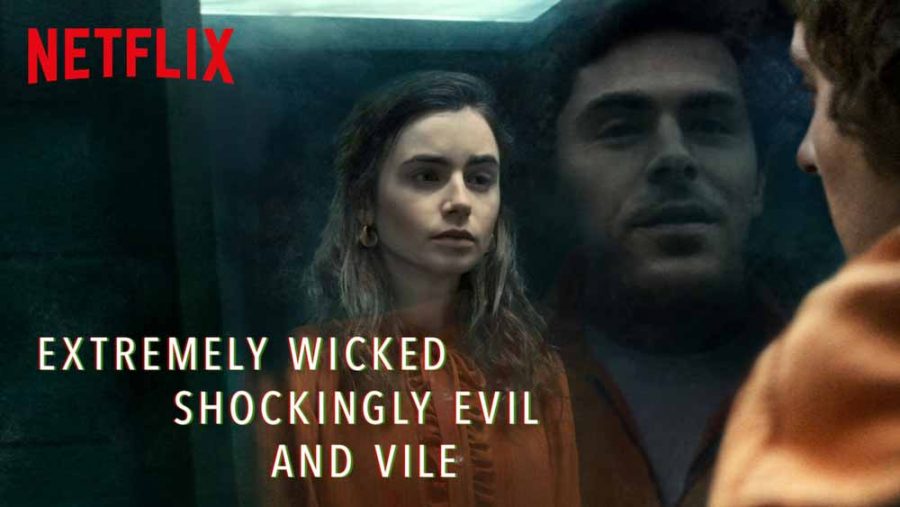 Theodore Robert Bundy was one of America’s most notorious serial killers. Between 1974 and 1978, it is documented that Bundy murdered 30 women but it is believed to be a much higher number. On the night before his execution, he confessed to the 30 homicides including 10 victims whose identities were unknown both to him and the investigators. Bundy was known for being an attractive charming young man which led him to trouble. Soon after the release of “Conversations with a Killer: The Ted Bundy Tapes” on Netflix, the movie “Extremely Wicked, Shockingly Evil and Vile” premiered. Following the many trials of capital murders and assaults, the movie takes viewers on a journey through Bundy’s navigation through prisons and the trouble he faces in both his relationship and his accusations.

Based on a memoir written by Elizabeth Kloepfer, Bundy’s girlfriend of many years, the movie is told through the eyes of the girlfriend, Liz, portrayed by Lily Collins. Bundy’s role was played by Zac Efron, which strongly represented the way women were easily influenced by Bundy and his charming qualities. Director Joe Berlinger thought since the beginning that Efron would be perfect for the role due to his appearance. Taking place in Seattle in 1969, law student Ted Bundy meets single mother Liz at a bar and they quickly begin dating with Ted helping to raise her young daughter Molly. Fast forward to 1974, news reports announce the deaths of multiple women tying back to Bundy. After hundreds of phone calls, he is soon arrested in 1975. Let out on bail, Ted returns home to Liz just to be found guilty of aggravated murder and kidnapping and is sentenced to 1-15 years in the Utah State Prison. A few weeks later, Ted is charged with murders and is transferred to Colorado where he soon escapes by jumping out of a second story window. Recaptured six days later, Bundy is back in prison when Liz visits him and ends their relationship. After cutting a hole in his cell ceiling, Bundy escaped again and was out in the mountains for several days when he was once again recaptured and held in Florida. Here, he starts a new relationship with old friend Carole Boone which resulted in marriage and the birth of their daughter. In court, trial judge Edward Cowart imposed the death sentence for the murders to be carried out with an execution by electrocution. At age 42, Ted Bundy was executed in January of 1989 and his remains were spread in the Cascade Mountains where he had previously deposited remains of his victims.

Character development: The movie follows the journey of the women who were strongly influenced by Bundy, particularly his girlfriend of many years, Liz. The film shows an honest examination of the effects of Bundy’s control over Liz and her spiral downfall into depression and alcoholism during his trials. Throughout the movie, Liz holds on to the small amount of hope that Bundy is innocent and decides to stay with him throughout the time of his trials. She slowly begins to lose hope and soon lets go of Bundy and cuts out all contact with him and continues on with her life and her new relationship with coworker Jerry. When visited by old friend Carole Boone, Ted quickly starts a relationship with her that lasts for the duration of the movie. Carole follows Ted throughout the years and ends up moving to Florida to be with him during the final trials. Carole was always fascinated by Bundy and strongly admired him despite the accusations.

Director/how movie was made: Written by famous screen writer Michael Werwie and directed by Joe Berlinger, Extremely Wicked has gotten a variety of mixed reviews and emotions. IMDb results show that the controversial movie received a 6.7 out of 10 stars with mixed reviews from critics. During his last trial where he was sentenced to death, U.S. judge Edward D. Cowart called Bundy’s actions “extremely wicked, shockingly evil, vile and the product of a design to inflict a high degree of pain and utter indifference to human life,” which is where the inspiration for the movie title came from. The movie was shot in a short span of 28 days full of busy schedules and long hours on set with little downtime. Werwie wished for the movie to be about seduction, betrayal and truth rather than violence and gore. Werwie explained that he wanted “to explore the love story of it all” Doing this puts focus on the emotional side of the story and the details behind Bundy’s mind and the relationships with the people close to him. A big lesson Werwie wanted viewers to take away from the movie is to think about Bundy’s famous line “murderers don’t come crawling out of the dark” and to be aware that monsters are often disguised as good, charming people.

For some odd reason, true crime documentaries and movies always manage to pull in viewers and fascinate them because simply, evil fascinates the human mind. This genre gives the audience a glimpse into the minds of people who have committed horrendous acts of violence and intrigues us to wonder how some people think of these things. There has always been a strong tension between good and evil and true crime manages to embody that lasting fascination with trying to understand other’s minds. Viewers are often hooked because they want to find out what drove these once innocent people to do the things they did. With this movie in particular, it’s good for women especially to watch it so that they will be more aware of their surroundings in the future and know what red flags to look out for.