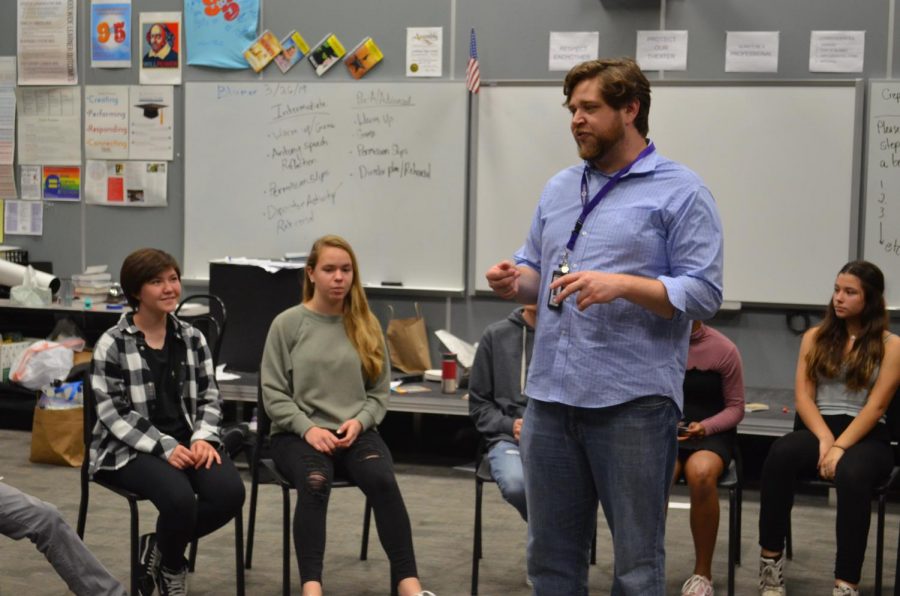 Theatre Director Mr. Blumer lectures in the middle of a circle of his students. Blumer is always having the students play interactive games to keep the class interesting.

The last few years have seen a great shift in instructors in the theater department. From the legendary Mrs. Hall to the fresh Mr. Blumer, they have both now had the chance to make an impact on the theater community here in Carlsbad.

Mrs. Hall was the director of the theater department here at school until two years ago, when she retired. For over 20 years, she has made a name for herself in our community. Her memory is one of pride, as she directed many plays and musicals that went on to win awards at the national level. Mrs. Hall ended her position with many awards under her belt, including the National Youth Arts honoring CHS with eight awards and 13 nominations during her last season in 2016-2017.

“Mrs. Hall was more authoritative and her blocking style required a lot of movement from all characters on stage,” senior Riley Dawn said. “Mrs. Hall had years to find what worked best with her students, and what was recieved the best by the people in the audience.”

Mr. Travis Blumer shadowed her teaching during her last season to observe her methods, in preparation to replace her in the 2017-2018 school year after she had retired. Mr. Blumer oversaw the production of the fall musical, Peter and the Starcatcher, and spring musical, 9 to 5, last year.

“Mr. Blumer is a lot more free with the blocking and would go with the flow and have fun along the way,” Dawn said. “He would encourage cast members to help out with blocking.”

Students under Mr. Blumer have described him as nice and perhaps having a more laid back teaching style, compared to Mrs. Hall. Such attitude helps students feel more comfortable with the instructions given to them.

“That’s why [the students] are so involved in his teaching,” Dawn said.

While both teachers have demonstrated two different styles of teaching, both directors were passionate about the theater program here at Carlsbad High, and have been dedicated in giving students a learning experience for the future. For years, our school has been known for its outstanding art program, the biggest being the theater program, thanks to Mrs. Hall. Mrs. Hall had years to establish herself as a talented director, now it is someone else’s turn.

Mrs. Hall has left a legacy to her name, and now Mr. Blumer is taking her place. Generations of theater students had her and have moved on to perform on greater stages. Mr Blumer is doing an amazing job so far as well.