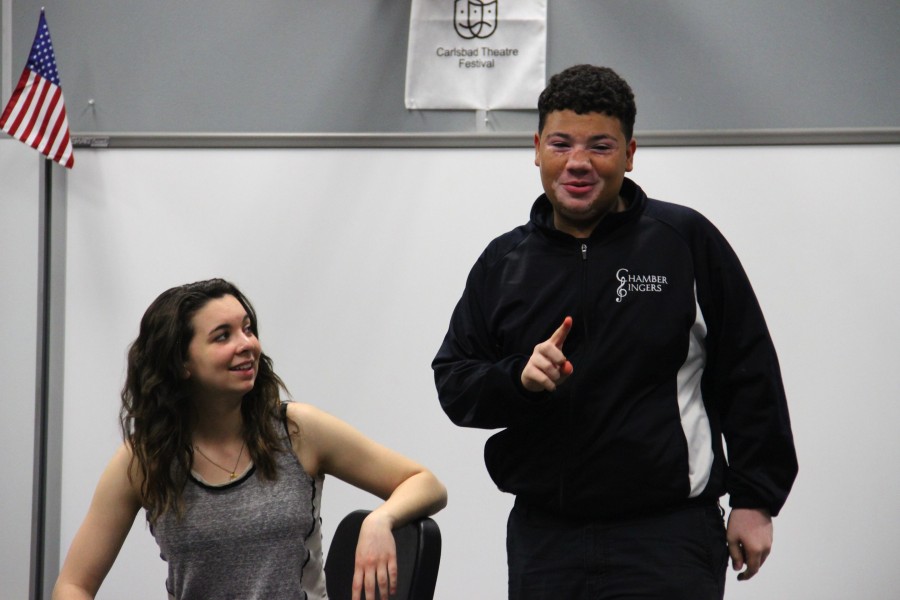 This year Carlsbad High School’s first annual Performing Arts showcase took place, involving a variety of acts ranging from fast-paced dance performances to laugh-out-loud skits from the improv club. This event occurred in the CAC on March 4. Its cast also included a variety of different people interested in showing off their various performing skills.

Mrs. Hall, the theater teacher, gave passion-driven students the chance they needed to show off and express their inner performer, leading to a funny, different and exciting showcase.

“She [Mrs. Hall] actually gave us almost complete creative freedom to do what we wanted with,” senior McKenzie Fink said.

As the foundation of the show, Mrs. Hall set the students up for success being a supportive and critical adviser of the showcase.

“She’s just a really good leader and she encourages us to be ourselves,” senior Ceara Carson said.

While there were some personal obstacles they had to overcome, they moved passed them with hard work, determination and some lancer pride.

“The hardest part for me was that by the end of the night I was so tired because I was doing so many different things,” Fink said.

Backstage was very hectic with different performers switching in and out of costumes to change their performance concepts, leading to an increasingly impressive display.

“Switching around from singing to dancing was definitely hard because I haven’t really been paying attention to dancing for a while, but I’ve been singing since elementary school,” Carson said.

Leaving the next showcase for the class of 2017 only makes the performers want to come back and do it all again, but this time as an experienced adviser tasked with giving constructive criticism.

“I am more than happy to come back and do it again because that was probably one of the most fun experiences of my entire high school career,” Fink said.

Being the show’s first year and setting such a high standard, the students hope to take the show to a new level each year where it will only keep progressing and eventually become a highlight of Carlsbad High School.

“I hope they can do this next year so I can see the showcase which would be pretty cool,” Carson said.

It was also a very emotional night for the graduating seniors seeing the horizon of new opportunities and reflecting back on the experiences they had during their time at CHS.

“It hit us that it was nearing the end of our senior year because the song said ‘I knew I had been changed for the better because I knew you’ and ‘I had been changed for good’,” Fink said. “We literally said ‘for good’ and started crying on stage and that was just an emotional experience to keep pushing through.”