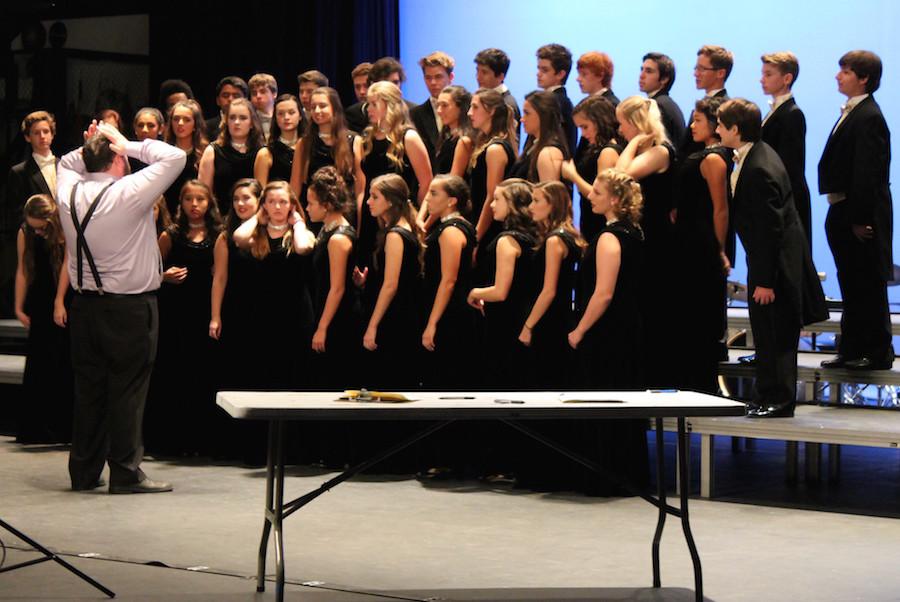 Members of choir get dressed up for photos and rehearsal. The CHS Choral Performance is taking place Dec. 3 to Dec. 5.

The annual CHS Choir Holiday Concert worked its magic, putting attendees in the holiday spirit through renditions of holiday classics. To ensure a fun-filled show for its audience, the choral department dedicated time to the behind-the-scenes elements of a successful performance.

In the beginning steps of the show, students must audition for preferred parts. Auditioning presents itself as a prominent aspect in the life of a choral student. From auditioning for the choir department to auditioning for spotlight parts within the show, the process varies.

“Mr. Bullock lets us know in advance when they’ll be and there will be a sign up sheet on the door,” senior Kammy Carbone said. “For in between solos, you will be in the room with Mr. B and just you or your group, but for solos in group songs, you usually audition in front of the class or at least in front of everyone auditioning.”

With a diverse assortment of songs throughout the performance, including both Jewish and Christian inspired songs, the process of song selection gives flexibility to the students.

“You pick the songs based on what type of concert it is, but Mr. B is mostly just looking for what you’d like to sing,” Carbone said.

After auditioning and song selection takes place, rehearsal must ensue. Considering the variable level of each song, the amount of practice necessary changes correspondingly.

“Some of the songs were more difficult so we have been preparing them since mid September, but others we learned just after Thanksgiving,” senior Garrett Clark said.

In addition to common preparations made for every choral concert, this year’s show instituted differing elements in comparison to previous years. Most noticeable of the changes was the show’s change of length.

“This show was definitely a lot shorter,” Carbone said. “Not as many people auditioned for in between solos so that definitely affected the length of the show.”

The Choral Department aimed to keep the show under an hour and a half. Through all of the hard work and dedication focused to create a successful show, each choir member must remember the reasoning behind his or her drive.

“I love to sing in the winter concert because there was a lot of people all around me and I felt a lot of camaraderie,” Clark said. “It’s just really invigorating to sing in a large group with songs like the Hallelujah Chorus.”