Oral Interpretation claims its spot in Speech and Debate 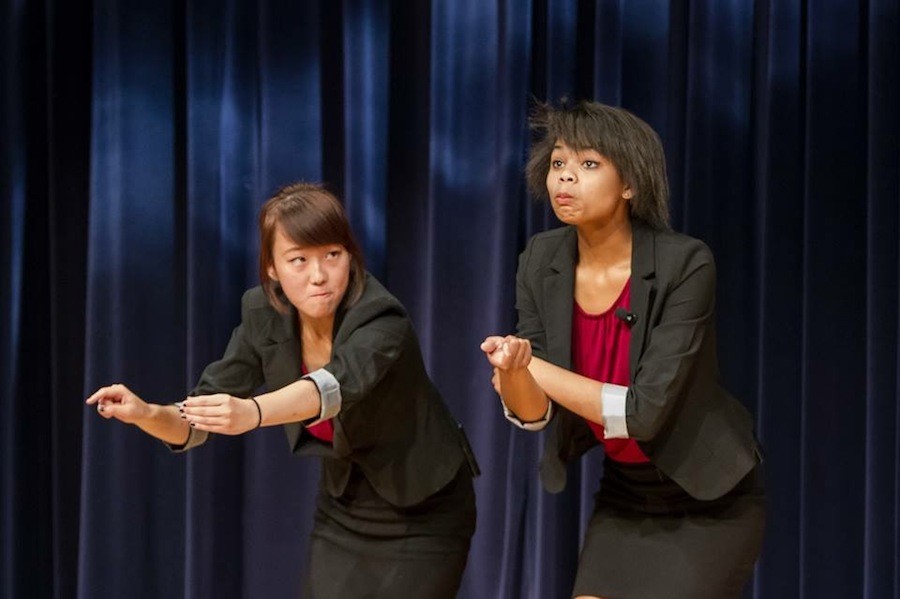 Speech and Debate member Emmy Kim and Nefertiti Orimiloye perform a duo interpretation at their end of the year showcase held at Dove Library.

In Speech and Debate at Carlsbad High School, there are several different categories, ranging from traditional speeches to classic debates. Something that many may not be aware of is that there is an acting element involved in one of the events.

In an event called Oral Interpretation, also known as interp, students are allowed to stray from the conventional debates and speeches while gaining a platform to act outside of a typical theater setting.

“In interp you are acting, just like in a play, except you have to play every character yourself, sometimes you might have to act as ten to fifteen characters,” senior and Speech and Debate member Jessica Sidoranova said.

There is a wide variety of genres that interpers can perform with different rules  and guidelines in each category.

“There is humorous (HI), dramatic (DI), thematic (TI) and duo,” Sidoranova said. “HI is an eight to ten minute funny piece, and everything performed has to be a published work. DI is an eight to ten minute dramatic piece, which is a really cool event because it puts a lot of things into perspective. TI is an event where you have a small binder and you have three pieces that connect to a specific theme. In duo, you can’t look at or touch each other. This rule differentiates interp from traditional acting and requires us to have strong pantomime skills, we are not allowed to use props either, so it all makes it more of a challenge.”

The competition status is very different for Oral Interpretation, many are not familiar with what interp is, making the category slimmer.

“Compared to the debate events, there are significantly less people that compete in interp, but that’s only because a lot of people aren’t completely aware of what interp is,” junior Ryan Howe said.

Although there may be less people in interp, the group of students is tight-knit and work just as hard as all other Speech and Debate members.

“Being in interp, you make so many friends, it’s like a big family, the interpers throughout the whole San Diego area know each other, ” Sidoranova said. “You would think that it would make the competition harder to compete against all of our friends, but in reality it’s a very supportive group and everyone is so nice to one another.”