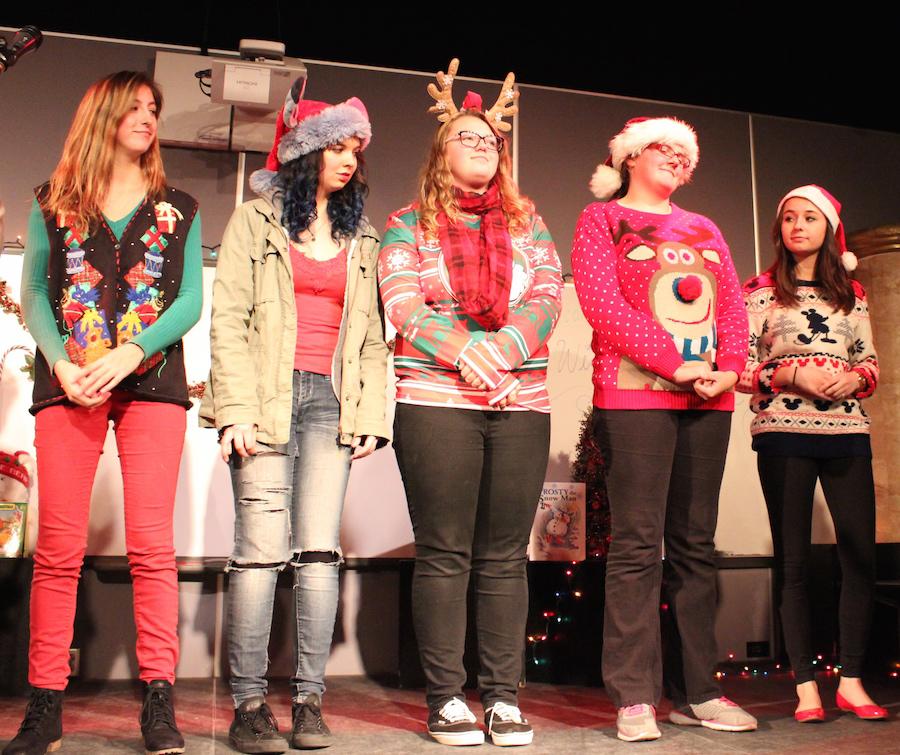 Members of Drama club compete in a "most spirited holiday dressed" competition during Coffee House Night. The night was filled with numerous activities from singing to games to yummy food from many clubs and audience participants.

On Thursday Dec. 18th, Drama club hosted a Coffee House Night, filled with a variety of performances, songs, food and holiday spirit. The performances ranged from singing to reading books such as “How the Grinch Stole Christmas,” and included students from numerous clubs and interests.

“Coffee House Night is an event put on by Drama club where people can perform or just enjoy watching the performances,” senior and co-president of Drama club Karinya Ghiara said. “It’s just a chance for people to come together and appreciate each other’s talents while eating food and drinking coffee.”

This event is held multiple times throughout the year, the most recent one in October around Halloween time. The show was free of charge and welcome to anyone in the community, including students, parents or anyone interested in learning more about the performing arts program at CHS.

Ally was one of the many performers of the night, playing a steel drum rendition of “Jingle Bell Rock.” As she began to play, the crowd joined in singing along with the song, exemplifying the welcoming and spirited atmosphere of the night. Although hosted by Drama club, the show was open for any performers to showcase their talents.

“Anyone can perform regardless of whether they are in the club or in theater,” Ghiara, who was also one of the many performers, said. “We usually get a pretty good mix.”

When the scheduled two-hour showcase was finished, students and parents alike were satisfied, ready to finish out the last day of school before Winter break, and get ready for the upcoming holidays. Before everyone left, however, one last surprise was in order.

“Everyone who performed were so awesome and fun,” Pateros said. “Also, Mrs. Hall announced the spring musical!”

The upcoming play, Ghost: The Musical, will go under production soon, ready to be unveiled for spectators in the spring.