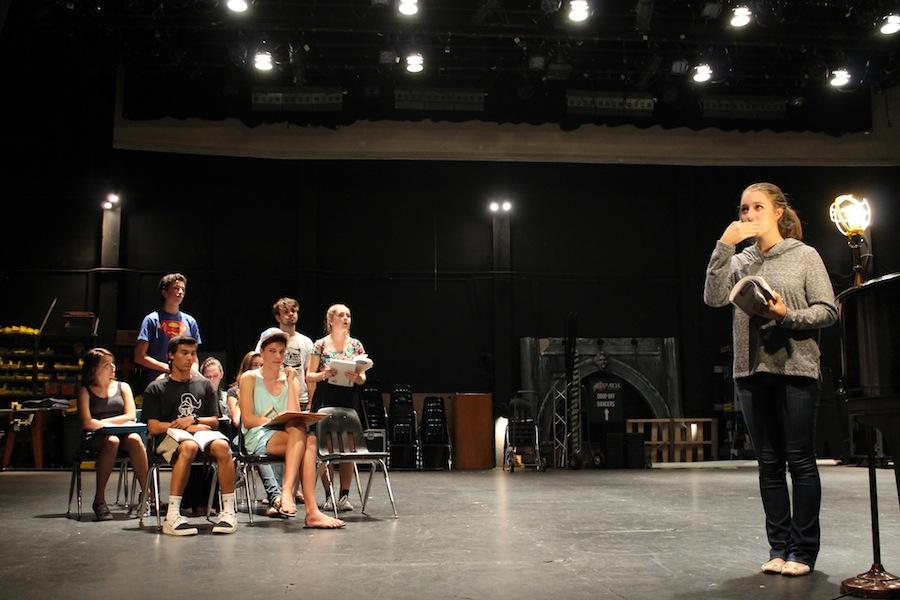 Senior Talia Cain and the rest of the cast of “The 25th Annual Putnam County Spelling Bee” rehearse afterschool. The play has showings on November 13, 14 and 15 in the Cultural Arts Center.

Typically at this time of year, the drama department is busy rehearsing for its fall play. Except this year, they are not preparing to stage a fall play, but the first ever fall musical. This musical, “The 25th Annual Putnam County Spelling Bee,” is playing on Nov. 13, 14 and 15 in the Cultural Arts Center.

“Every fall, I try to do something completely different,” drama teacher Mrs. Hall said. “I have never been able to do a small musical in the spring because I need gigantic casts. This play just tickled my funny bone, so I decided that something with a very small cast, even though it is a musical, could be pulled off in the fall.”

The storyline of “The 25th Annual Putnam Spelling Bee” has, as implied in the title, a little twist.

“This musical is a spelling bee where we follow six spellers on their journey to victory, and we also meet some adults that are involved in running the spelling bee,” Hall said. “Also in the show, we have audience participation. We have adults who come to the stage alongside the cast to spell words, so it is literally a spelling bee.”

Although the audience will get involved in the musical, do not fret if you are not the participating type.

“As people come into the theatre, we are going to be looking for willing volunteers, and we will give them their instructions,” Hall said. “They will know before the show starts if they are going to be in it. We aren’t just pulling people randomly from the audience without their consent.”

For those audience members who are chosen to participate, their success is held in the hands of junior and advanced theatre student Ryan VanDerLinden who plays Vice Principal Panch.

“In the script, there is a giant list of words to choose from,” VanDerLinden said. “There are funny definitions and words used in a sentence, and I can just choose whatever word I want and make it as funny as possible for the audience.”

As this show is full of many firsts, members of the Carlsbad community should not miss out on this opportunity to come watch and maybe even participate in this show.

“This performance is nothing like what Mrs. Hall has ever done before,” junior and advanced theatre student Alison Pateros said. “People should come and see it because it’s different, and I that Mrs. Hall was correct in taking a risk and doing a musical for the fall show — it’s going to be awesome.”