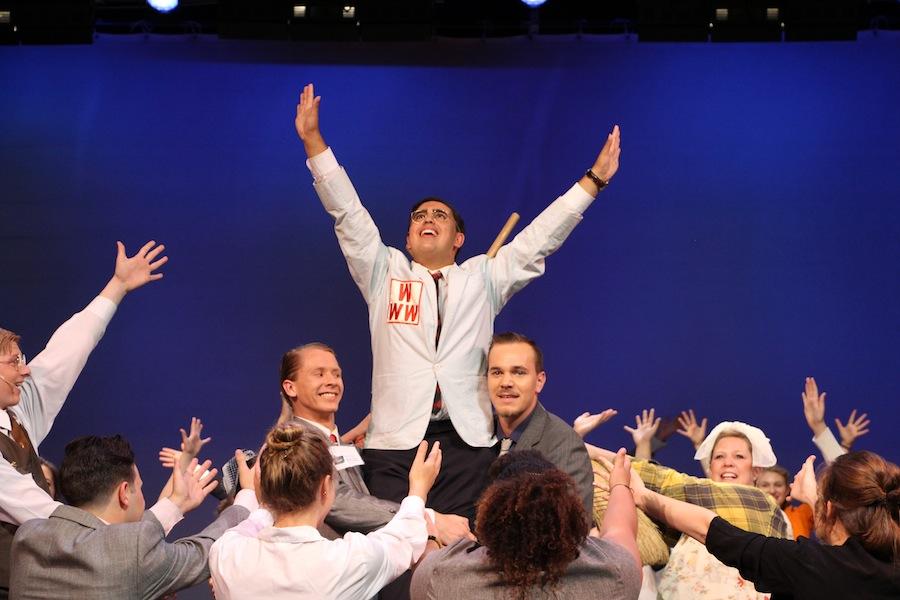 Junior Jonah Ibrahim takes the spotlight as seniors Collin Team and John Norall hold him up. This dance number was one of many through out the entire study.

The combination of orchestra, tech and many dedicated singers and dancers have come together once again for the dawn of another spring musical. While the story onstage takes place during a theater production, not many viewers consider the hard work and time put into the show as a whole.

Carlsbad High School’s musical production is holding their spring musical “How to Succeed in Business Without Really Trying” on May 2,3,8,9 and 10 in the Cultural Arts Center.

“The play follows a young window washer, Finch, and his ride in the corporate world without really putting any effort into it,” senior Adam Gilmore said. “He slides by in several situations and is able to climb to the top, being as charismatic as he is.”

This musical differs from previous shows because it is more of a comedy, and focuses on compelling audiences with humor and wit.

“It’s one of those shows that you see and so much happens in such a short amount of time and it’s just a lot of fun to watch,” Gilmore said. “You laugh out loud, enjoy the music, and there is even a couple heart-felt moments in there too. It is a very emotional variety of a show.”

The cast, crew, and orchestra have been rehearsing together for several months to put together this musical and prepare it for opening night. Students have been using after schools hours to perfect their parts.

“Rehearsals have been held every day after school and the tech crew has been working hard on the set design with all the props and shifting,” senior Evan Ridpath said. “It is really a big student-involved collaboration, so that makes it all more rewarding.”

Auditions took place in January and this was a chance for students to showcase their talents and earn a spot in the musical.

“For the auditions we were given two different song choices from Mrs. Hall and then we sang them to her,” senior Valerie Maybaum said. “Then if you got a callback you performed speaking lines and a dance. After that they show the cast list and you get to find out your character.”

Aside from the main character, J. Pierrepont Finch, several other major characters play a large role in the production as well.

“My character is J.B. Biggley and he is the boss of the World Wide Wicket Company which is where the story takes places,” Ridpath said. “He is very passionate about his work and has some secrets that are yet to be revealed and very funny to the show. Biggley is a “college man” so he is very proud of his old school and that plays a big role in how Finch persuades him.”

Opening night will be held tonight, May 2, at 7 p.m. in the CAC. Tickets are $15 and can be purchased at the door or beforehand.

“Before auditioning for the show I didn’t know anything about this musical and now that we have worked on it for the past couple of months it’s a fantastic show and I am really excited for people to start watching it,” Gilmore said.