“Singin’ in the Rain” channels the golden age of film 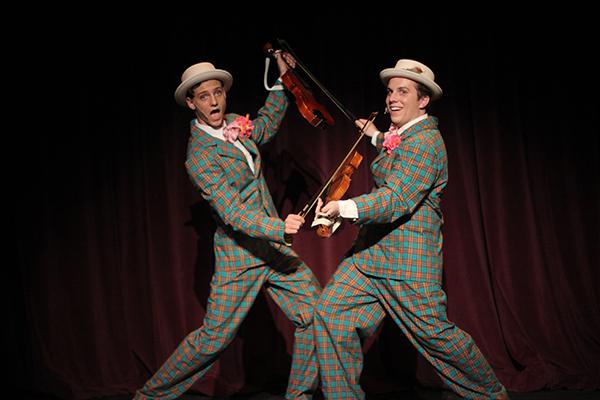 Juniors Josh Collins and Evan Ridpath perform in Singin' in the Rain as Cosmo and Don Lockwood.

Carlsbad’s spring musical plays off two layers of nostalgia. Based off the classic 1952 film, the plot itself moves back even further to 1927, at the dawn of the talking picture industry. With a low-sliding trumpet highlighting the score and exhausting song-and-dance routines guiding the plot, “Singin’ in the Rain” introduces the genre musical theatre to yet another generation.

The plot centers around two silent film stars, Don Lockwood  (Evan Ridpath) and Lina Lamont, (Katie Ohlin) at the emergence of the ground-breaking talking pictures in the golden age of Hollywood film production.

The conflict then begins when a new star, Kathy Selden (Madi Lewis), fills a more genuine role than the hollow personality and squeaky voice of Lina Lamont.

A definite high point of the musical is as it should be– the electric musical numbers. For one, Lewis’ superior voice added a wholesome, warm feel all the musical numbers. Also, the almost constant tap-dancing rhythms of the iconic Gene Kelley were handed down to the much less experienced cast, making Ridpath dance off his suspenders and microphone at the end of the famous “Good Morning” routine.

Also a highlight was the mixed singing, dancing, musical and humor talents of Josh Collins, who plays Cosmo Brown, the lifelong friend of Don Lockwood. In his “Make ’em Laugh” scene, he maintains the spontaneity and erratic behavior of a tornado — crashing through a brick wall and nearly flipping a couch on multiple occasions.

Along with Collins, Ohlin’s indignant and squeaky portrayal Lina Lamont adds an element of humor to the play. Never breaking her egocentric and nasal-voiced character, she performed as a lovable villain throughout the play.

Exclusive to the CHS production of “Singin’ in the Rain” were the interwoven short films which showed cooperation as a school rather than a department. Created by the Carlsbad Film Academy class at CHS, “The Royal Rascal,” “The Dancing Cavalier” and a “talkie” demonstration cameo by Eric Tarter were well-produced and humorous digressions from the plot.

And of course, the accidental breakthroughs of the show had to be Tom and Chris Robertson, the teaching father-son duo whose roles as studio manager and director, respectively, also helped connect the drama department to the rest of the school.

Overall, the cozy romance between Don and Kathy, the unpredictable humor of Cosmo and Lina and the additional work of the orchestra, film academy and Robertson family, all contributed to a nostalgic sense of community since the movie first released. In sparkling song and dance, the spring musical brought all its attendees closer to the school and the magic of entertainment.