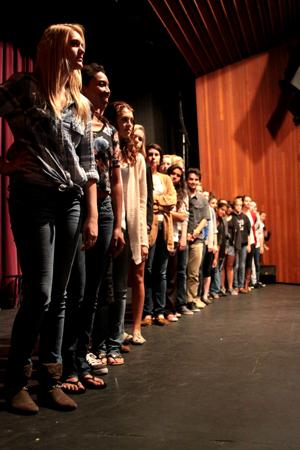 The advanced theatre program lines up after rehearsal for their DTASC showcase. (credit: Jared Cohn 10-22-12)

Curtains up, spotlight on and the performance began. On Oct. 23, the Advanced Theater students performed their scenes for DTASC, the Drama Teachers Association of Southern California, fall festival at their theater showcase to prepare for the upcoming competition.

Events like World Musical, Small Group Comedy and Student Written Serious were all performed after weeks of choreographing, line memorizing and stage managing.

“Since school started this year we have formed our groups and selected our material based on the categories that were given,” junior Evan Ridpath said. “From there, we have been rehearsing each class in order to figure out the most effective way to convey our scenes.”

Preparation for DTASC has been very time consuming but is worth it to succeed in competition. Each group has been working extremely hard every day to perfect their scenes.

“The students picked their own material, staged it, directed it, they cut it to time,” Advanced Theater teacher Monica Hall said. “They have taken this piece from its very infancy all the way to where it is now which is a memorized, characterized, fully staged piece. They have worked very hard and it’s a tough process and they’ve come through.”

On Oct. 27, the students will be going to Perris, CA to perform their scenes, be critiqued and be ranked based on performance success. Hall believes the students have made successful scenes that have promise to win in the final rounds.

“There are over 70 schools there and the judging is up to whatever they like, but I think our entries will give them what they want. Strong characters, well-cut, well-prepared scenes so they should do well,” Hall said. “I suspect all of them will make semi-finals and finals also. If we get some trophies, bring home some hardware, they deserve it for getting the recognition of the judges amongst so many schools.”