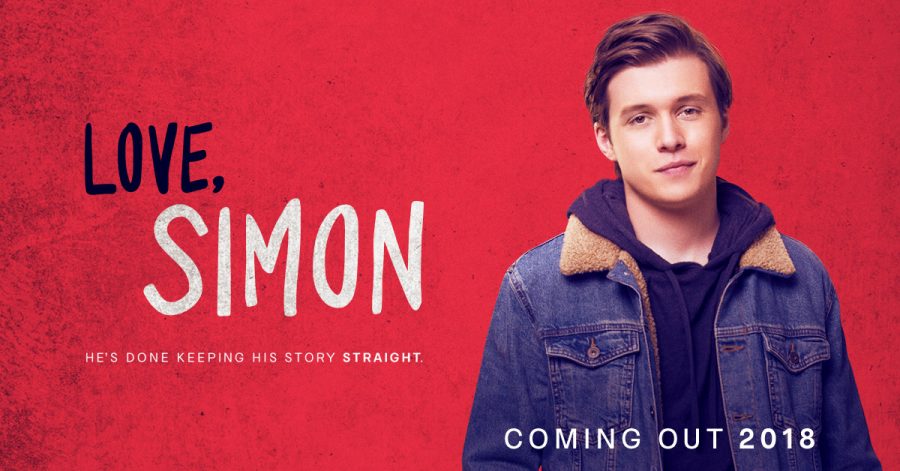 The most romantic scenes from cinematic history have been the boy and the girl that end up falling in love, but Love, Simon has finally broke the trend. Love, Simon has introduced us to the true love between one boy wit one secret. It starts with what seems like a normal teenage boy, Simon Spier, that is keeping a secret from the rest of the world. As he is dealing with being gay all by himself, he soon finds another boy with his same secret.

In the movie Love, Simon, Simon Spier (Nick Robinson) introduces us to his friends and family that he stereotypes into a perfect life. He begins by saying he actually likes his family and that his group of friends is the normal group that drinks ice tea together. His friends Leah Burke (Katherine Langford), Nick (Jorge Lendeborg Jr.) and Abby (Alexandra Shipp) never go anywhere without each other, and are hidden from Simon’s secret and his secret email friend. As the movie progresses, Simon is blackmailed by an outside friend, Martin (Logan Miller) with the emails Simon had been having with his secret friend. Martin wants Abby and will do anything to get her. As the plot moves along, Simon does everything he can to not get his secret released even if it means jeopardizing his friendship. In the end Simon regrets his decision to hurt his friends and now his secret is out and he is alone. At the end of the movie, romantic sparks fly, but you will just have to watch the movie to see the ending.

In this romantic comedy, many things are to be taken away from the story line and the movie in general. With many teenagers are used to there being a romance between heterosexuals and now that Love, Simon has come out, the audience is falling in love with the movie and the diversity. It takes a lot of courage to come out in high school, let alone to your own parents. This movie shows that coming out with or without support can be hard at first, but soon enough, you can inspire others to do the same and feel comfortable with who they are. At the end of the movie, Simon wrote a note on the same website where his news was released and it sparked a trend. Many kids after that were coming out or sharing some of their own secrets. By coming out, Simon made everyone else feel that they could feel like he does.

Along with the movie having a very sentimental plot to it, it also had many comedic moments. Nick Robinson did an amazing job playing Simon in the movie. When needed he was funny and quirky. When he finally came out to only one of friends, he became very weird and flirty with boys and always made those scenes romantic and comedic. For being a gay character, Robinson played the part amazingly ,making the audience see his true feelings. Whenever he was thinking about boys, he brought the romance to another level making the audience wanting him to find his true love. With Robinson and many others from the cast, it made the movie very funny and made you emotional in many scenes.

With Love, Simon coming out with 92% Rotten Tomatoes, this is definitely a movie worth seeing. If you plan on watching the movie sometime soon, make sure you stock up tissues and prepare yourself for many, many tears. The love, happiness and sadness in this movie will make you fall in love with the cast and the secrets that will soon unfold.